The Problem With Truth 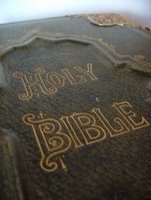 There's an interesting discussion going on over at Hamo' s blog.

Perhaps because my upbringing was conservative evangelical, and so I have some sort of filial loyalty there even though it is no longer a neighbourhood in which I choose to live, it bothers me that conservative evangelicals are so hung up on truth. It is not that I do not think truth matters; but that I see truth very differently. It bothers me when well-respected evangelical writers and speakers such as DA Carson and Ravi Zacharias accuse those grappling with what it means to be Christian and post-Modern of having a low view of truth – by which they actually mean, “understand the nature of truth differently from themselves” – and a low view of God’s Word – by which they mean the Bible, and the Doctrine of its Inerrancy – thus creating a breeding-ground for aberrant Christianity.

Jesus claimed that he was the truth. That implies that truth is not synonymous with ‘facts,’ but is a person; and that, therefore, truth is not something to be learnt intellectually, but something to be experienced relationally. Not doctrine to believe, but a person to get to know over time (and into eternity). That is, I would argue, a very high view of truth. And I would add that my knowledge of truth is both partial and provisional: partial because this side of heaven I cannot fully know God as I am fully known by him (though we are promised that this will change); and provisional because my expectation (based on Jesus’ expectation) is that my faith should grow, not remain static. But, again, I would argue that that is not a low view but a high view of truth.

A little generosity would concede that there are aberrant views in every tradition, denomination, movement and schism of the Church. Perhaps most of these are children of their own time. Those parts of the Church that do not baptise the infant children of believers did not – and could not – have existed in any significant extent before the advent of Modernism. Likewise, within Anglicanism, neither Liberalism nor Evangelicalism could have existed before the Modern Era. Liberalism, with its Higher Criticism, denies the literal nature of miracles, ascribing solely symbolic meaning instead, because miracles are un-natural and un-scientific. And in so doing, it denies the immanency of God. Evangelicalism defends the literal nature of biblical miracles, but creates the Doctrine of Dispensationalism in order to occupy the same ground as Liberalism in denying the miraculous today. And in so doing, it also denies the immanency of God. (The not unprecedented irony of the Pharisees and the Sadducees coming together to remove Emmanuel…) Two sides of one coin, minted in a given period of history that is losing currency.

I’m naturally cautious when it comes to Doctrinal Statements to be adhered to as a measure of orthodoxy. Specifically, I’m uncomfortable with evangelical claims that the Bible is the only Word of God – because the Bible itself claims that Jesus is the Word of God…And I don’t accept inerrancy, either. For a start, it requires too many caveats. Well, no: for a start it goes beyond any clear claim that the Bible makes for itself. That said, caveats. Clearly the Bible is not inerrant in a literal sense when it speaks in a poetic voice: the earth does not rest on pillars; the sea is not held back by gates. Therefore inerrancy claims that the Bible is inerrant [in relation to matters of faith and conduct] [when taken as a whole] [in its original languages] […] Too many caveats. But there is a more serious issue: there is no inerrant interpretation of the Bible (unless you accept the authority of the Pope, which Protestants don’t). And that means that if inerrancy is required in order for the Bible to be inspired and authoritative as a revelation of the nature of God and his creation, then it isn’t a revelation at all: it is, rather, a concealment. And, as I understand the Gospels, I’d rather hold to a God who chooses to reveal himself, than to a book that is inerrant. And again, only a Modern definition of truth requires such convoluted doctrinal positioning…

The fundamental difference here is between a Modern view – in which truth is propositional, and empirical (concerned with the physical, ‘natural,’ world) – and a post-Modern view – in which truth is relational (which, contrary to standard accusations, is not the same as relative) and ‘soft’ (embracing the emotional, spiritual, ‘super-natural;’ capable, say, of thirst, or of being moved to weep). And ‘my concern’ with those who are ‘concerned’ about people like me is that they may well be more defending a Modern understanding of the Gospel than the Gospel itself…