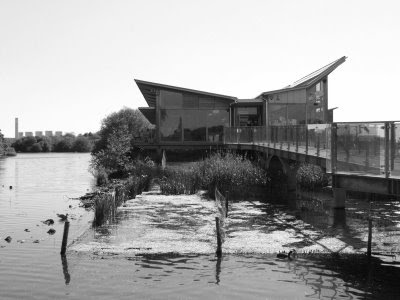 The cafe at the Attenborough Nature Reserve is a great place to sit and watch, and especially so in the spring with so many baby waterbirds - coots hiding in the reed-beds, herons squawking in their tree-top nests, goslings and ducklings trailing along behind their parents...
Recently we've been down there in the rain - a flotilla of swans moving out onto the water in formation, necks hunched down into their bodies (I suppose if your bottom-half is wet already, a wet top-half makes little difference) - and in the sun, walking along the River Trent.
It is certainly one of the places I shall miss when we move.
Posted by Andrew Dowsett at 6:03 am No comments:

My Book (Is Now Available To Buy)

One of the projects I have done at college this year has been to create a book of photographic images I took over a three-week study trip to , accompanied by meditative reflections I wrote in my journal at the time.

A number of people have expressed an interest in the book, and I’ve just made it available to buy online. You can find it here:

In the footsteps of Jesus

I’d love it if you would take a look, and even more so if you would buy a copy. Thanks.
Posted by Andrew Dowsett at 8:54 am No comments:

today is incredibly decadent. In the today we have a massive, and growing, gap between the richest and poorest in our society. We have a serious mental health problem among adults, and our children enjoy the worst emotional health of children in any ‘developed’ nation. We are marked by self-indulgence and despair. And the financial system that has funded this decadence is starting to give way beneath our feet, opening up a sinkhole that may yet suck the whole decadent society into it…

I’m not talking about ‘people out there.’ I’m talking about people like me. I’m talking about me: I am, by default, decadent. As an adult, I have now spent nine years in further education, very little of the cost of which I have incurred myself. I have travelled all over the world, not as a soldier or as a merchant, but as a tourist, as someone on journeys of discovery and self-discovery – something that, until very recently, only the aristocracy did. I believe I have the right to be entertained – by musicians, actors, by Saturday night TV (which is, incidentally, the direct descendant of the dance hall variety show, combining our desire for titillation with our disgust of our fellow man that causes us to withdraw to the privacy of our own living room) – to all of whom we act as collective patron. And the entertainment I use to distract me from life, and let’s be honest it is hardly satisfying entertainment, is increasingly self-referential: the move from rock stars and actors as celebrities to people who are famous simply for being famous; TV shows that show clips or outtakes from other shows; endless award ceremonies (nothing wrong with recognising talent, but do we have to show these occasions on TV?); ‘reality’ (instant fame) shows…

I’m not anti-education, anti-travel, anti-entertainment: all these things, and many more aspects of the decadent society, can be very good. I’m not a miserable Puritan. But I do believe we have got things way out of balance.

Decadence is not ‘out there’ – it is ‘in here.’ And the question is not, ‘am I decadent?’ but, ‘will I choose to be one of the counter-cultural few who steps out of decadence to model a different way of living together as community?’

Posted by Andrew Dowsett at 1:44 pm No comments:

I’m thinking about decadence – not as a personal lifestyle choice, but as a sociological phenomenon. Certain sub-cultures or even whole societies are decadent (think the Bohemian enclave of at the turn of the last century, or the last days of Ancient Rome). Such societies are typically marked by an extreme socio-economic imbalance, a massive gap between the wealthiest and the poorest, resulting in the rich living a life of laziness and self-indulgence, and the poor living a life of hopeless despair.

Both ends of the spectrum lead to lifestyles which may be considered to be immoral (e.g. financial deception, sexual promiscuity), what we more commonly think of as decadence. But while we need to own personal responsibility for our actions, decadence as a sociological phenomenon calls into question the degree to which decadence is a personal lifestyle choice: I would suggest that as a society becomes more and more decadent, individuals within that society become increasingly decadent by default position, not active choice; and that the active choice becomes choosing not to live a decadent life – that is, to begin with a few counter-cultural individuals opt into decadence, until in time a few counter-cultural individuals are opting out of decadence.

It is worth noting that history tells us that societies that have arrived at a state of decadence generally implode. It is also interesting to note that recent studies suggest that the mental and emotional health of a population is highest in nations where the gap between the wealthiest and the poorest is smallest – suggesting that the secret to happiness is neither material riches nor the renouncing of possessions, but equality and fairness…

Posted by Andrew Dowsett at 1:41 pm No comments:

What Would Happen If...

After this the Lord appointed seventy-two others and sent them ahead of him to every town and place where he was about to go. He told them, “The harvest is plentiful, but the workers are few. Ask the Lord of the harvest, therefore, to send out workers into the harvest field.” (Luke 10:1, 2)

“Do you not say, ‘Four months more and then the harvest’? I tell you, open your eyes and look at the fields! They are ripe for harvest. Even now the reaper draws his wages, even now he harvests the crop for eternal life, so that the sower and the reaper may be glad together. Thus the saying ‘One sows and another reaps’ is true. I sent you to reap what you have not worked for. Others have done the hard work, and you have reaped the benefits of their labour.” (John 4:34-38)

What would happen if we actually believed Jesus when he said that right now there is a plentiful harvest in every town and place?

That right now the people living around you are ready to enter into the experience of God’s kingdom, of his circumstance-transforming, people-liberating reign? That is, to meet Jesus.

But, of course, we don’t actually believe Jesus. We don’t believe that is what he meant. Obviously, he meant the specific context that the twelve, or the seventy-two, found themselves in. Not a principle that is in any way paradigmatic for us today. Hypothetically, there must be places where the harvest is plentiful, but we don’t know where, and if we were by some chance to stumble across such a place, that would be God’s sovereign grace. Not that God’s sovereign grace extends across our time and space…

“If I was in that context, I’d be reaping the harvest the people there are failing to reap, but I’m called here where the harvest isn’t ready. Perhaps if I wait patiently, for a few months, or years, a seed might sprout…”

“That would be too easy. It’s got to be harder than that. If it isn’t hard, really hard, it isn’t genuine…Only when it is deeply unattractive can we be sure the message is the true gospel.”

But then again, what if Jesus actually knew what he was talking about?

I’ve been challenged again by the idea that people might be waiting to meet (not a bunch of his disciples, but) Jesus.

Posted by Andrew Dowsett at 2:06 pm No comments: