It must be horrific to be an MP at present.

For two-and-a-half years, the Prime Minister has refused to listen to her own party, to the opposition parties, to elected representatives—elected by the 52% and the 48%—of all our communities, there by the will of the people to work for the common good, to investigate and propose and amend and improve legislation that impacts all our lives.

In addition, they are daily accused of betraying democracy by an ultra-right-wing press, accountable to no-one, offering no solutions to any of the challenges we face as a society, who exist to stir up hate (there is money to be made there). They are daily derided by the electorate. They receive hate mail and death threats, as they go about their work under utterly unreasonable pressure. It should come as no surprise that many of them are ill as a result of all this.

Who would be an MP right now?

It has long been the practice of the Church of England to pray daily for our Members of Parliament. I can't think of a time when they have been more in need of our prayers.

Posted by Andrew Dowsett at 10:59 am No comments:

My mother church is St Mary’s Broadwater, far distant on the south coast. I was baptised there when my parents were on furlough from the Philippines. I have never attended that church; but every day of my life, members of that congregation have prayed for me—just as my mother has prayed for me every day of my life. Some of them only met me as a baby; some remember me from summer visits as a small boy; some have left this life to enter the nearer presence of God, joining the great cloud of witnesses who cheer me on. Some have never met me, but have had the baton passed on to them by those who did.

The primary work of love—before and beyond all other forms of nurture, however essential—is prayer. The primary work of a mother and a mother church is to pray for her children, from before they are born and long after they have grown up and left home; even to her dying breath. Even mothers who do not believe in God carry their children in their thoughts, at once within and somehow mysteriously beyond themselves; and that is prayer.

This Sunday I cannot be with either my mother or my mother church. But I will give thanks for both. Their prayers have sustained me, and, in ways we will never know, shaped me towards who I am, and am becoming.

Posted by Andrew Dowsett at 10:58 am No comments: 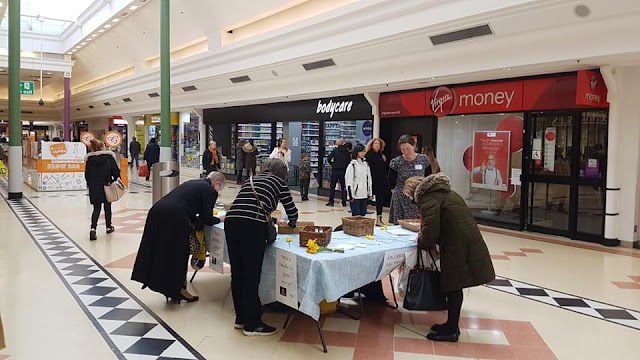 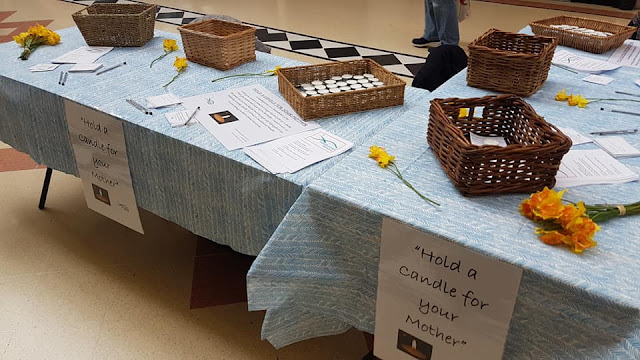 Yesterday, for the third year running, members of Sunderland Minster spent the day at a stall in the neighbouring shopping mall. Ahead of Mothers’ Day this coming weekend, we were there to hold out the invitation to mark the occasion by writing a message of appreciation or a prayer, and placing it, along with a tealight, in a basket. The messages would then be displayed at the Minster for a whole week, while the tealights will be lit at our morning service on Mothers’ Day itself. 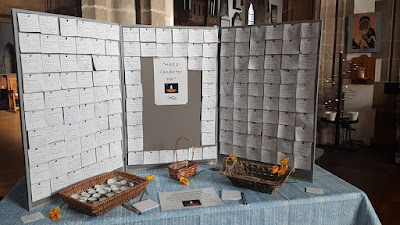 I find engaging people I don’t know in conversation particularly hard (and instead of approaching people, I quietly pray, asking God to send people to me). Yet each time we do this, it seems to meet a need. For me, the highlight is the many often deeply personal and moving conversations I get to have over the course of several hours simply being purposely present to those neighbours Jesus calls us to love as we love ourselves.

Yesterday, conversations ranged from the humorous—
one boy out with his mother decided that he would get her a Mothers’ Day card when he turned 18; I suggested that he practiced every year until then, so he’d get it right—

to the appreciative—
‘what a wonderful idea! You’ve made my day!’—

to the faltering—
‘what is there to say, after she’s been gone all these years; and how to say it?’—

to the poignant—
with those who have lost mothers very recently—

to the timely—
with international students who miss their mothers—

to the spoken/unspoken—
with the woman pushing a reborn doll in a silver cross pram... 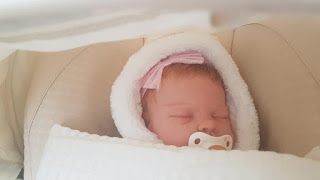 I found myself thankful for the opportunity; for the people God sent our way; and for the fabulous team from the Minster who took turns on the stall.

I’m also struck by the number of people who walked by, took in what we were offering, and felt compelled to come back to us—the need for a bit of ‘processing time’ before doing so; and the way the nature of a shopping mall makes that possible...

Is there something we can learn here?

Posted by Andrew Dowsett at 9:34 am No comments:

There was once a shepherd who had a hundred sheep. When one wandered off and lost its way, she left the ninety-nine in the open field and went searching.

On that day, the ninety-nine taught her nothing about being a shepherd—about herself, about her vocation in the world—that she did not already know (that is, that she had already learned through a hundred previous frustrations, failures, and triumphs).

But the one that was lost?

Through that sheep, she discovered just how far she would keep on going without giving up...

She discovered just how attentive she was, to footprints in the soft earth, and wool snagged on thorn bushes, and faint distant bleating...

She discovered just how joyful weary bones and scratched skin could be, and just how many others she could draw into celebration...

Posted by Andrew Dowsett at 8:48 am No comments:

‘Thus says the LORD: Cursed are those who trust in mere mortals and make mere flesh their strength, whose hearts turn away from the LORD. They shall be like a shrub in the desert, and shall not see when relief comes. They shall live in the parched places of the wilderness, in an uninhabited salt land.
‘Blessed are those whose trust is in the LORD, whose trust is the LORD. They shall be like a tree planted by water, sending out its roots by the stream. It shall not fear when heat comes, and its leaves shall stay green; in the year of drought it is not anxious, and it does not cease to bear fruit.’

Jeremiah’s meditation on Psalm 1 seems naïve—and all the more so given that Jeremiah himself will later be imprisoned and even thrown into a cistern by the powerful men he spoke against (see chapters 37 and 38). But he has in mind the imminent exile, in which the elite of Jerusalem would be carried off into a far land as a consequence of their collective refusal to return to the LORD. The righteous and unrighteous alike would be swept away into exile; but there, those whose trust was in the LORD would flourish—the likes of Daniel, and his three friends, and Esther—while those whose hearts turned away from the LORD would whither.

Jesus told a parable—a provocative story—about two men, one rich and the other poor, one powerful and the other possessing less agency. The story starts in the world as we know it, and continues beyond death.

Death is the ultimate exile, being carried away from the land of the living. And all are carried away into exile, regardless of how they have lived. But the experience of the two men, both carried away, diverges: the one who had trusted in mere mortals and made mere flesh his strength experienced a parched wilderness wherein there was no relief to be found; the one whose trust was in the LORD experienced reviving, the absence of fear and anxiety.

Death is the ultimate exile, not the ultimate destination or state, reality, or end of the story. And the testimony of Jeremiah, of Jesus, of scripture, is that those who trust in the LORD do not need to fear exile, for even there they will be sustained.

Posted by Andrew Dowsett at 8:07 am No comments:

Email ThisBlogThis!Share to TwitterShare to FacebookShare to Pinterest
Labels: Bible

Jesus and the Iranians

Week 4 of our Iranian baptism preparation class, and the second week of listening to the candidates’ stories of how they met Jesus. Each person’s story is unique; but at the same time, there are certain recurring themes, or common threads. These include:

having a big problem, or problems, in their life, over an extended period of time—a problem they could not resolve in their own power—which may or may not result in anxiety or depression;

being evangelised, one-to-one—often (though not always) by a close friend or family member, someone they had known for a long time, and in whom they had witnessed a transformation in their personality;

having met Jesus, experiencing a noticeable transformation in their own lives, such as being notably less anxious or angry;

[This is not to say that Christians don’t experience anxiety or depression. Anxiety and depression are natural ‘healthy’ bodily dis-eases resulting from how off-kilter society has become, where we treat human beings as machines intended to make or spend money. Nonetheless, it is to say that meeting Jesus is somehow transformative.]

the central, and centering, experience of peace;

an ongoing experience of miracles—by which, in this context, I do not mean dramatic apparent violations of the laws of nature, but rather a world-view that recognises grace to endure the challenges of life that, again, is beyond our own power to produce. (Miracles are in the eye of the beholder.)

I find this interesting because so many people in my own culture live with anxiety and depression, and face overwhelming grief for a thousand different things, caught up, as we are, in ‘the collateral damage of life’ (Pavlovitz).

I am convinced that God has sent these Iranian sisters and brothers to England because we need to learn from them.

I believe that one day it will be safe for them to return home. But not, I believe, until God has done through them the purposes for which he has brought them here in the first place.

Posted by Andrew Dowsett at 9:10 am No comments: