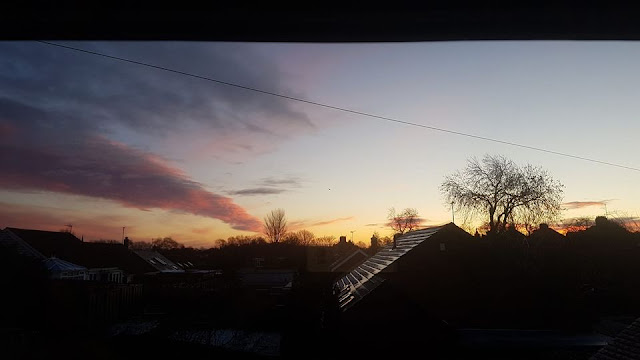 A new day dawns. There is work to be done. For now, pause: breathe. Savour the gift of this moment. Re-centre yourself in the Giver of Life.

Posted by Andrew Dowsett at 8:41 am No comments:

Hunt for the Wilderpeople

Last night we sat down to watch Hunt for the Wilderpeople (2016). As with the more recent Jo-Jo Rabbit (2019), Taika Waititi—who in both cases wrote the screenplay adaptation of other people’s novels—shows that he is sensitive to a good story, a story-for-our-times; to children who are lonely and looking for a tribe to belong to; and adults who are, with good reason, suspicious of the dominant tribe; and what becomes of them.

To see the world equally convincingly through the eyes of vulnerable child and vulnerable adult is a rare gift. As a director, Taika Waititi is also clearly aware of others who might share this sensitivity. The chemistry between central child-and-adult actors, between Julian Dennison and Sam Neill in Hunt for the Wilderpeople and between Roman Griffin Davis and Scarlett Johansson in Jo-Jo Rabbit, is mesmerising, drawing you in to the story. So, too, the deftness with which dark humour and difficult subject matter (respectively, children’s social services in a broadly contemporary New Zealand, and the Hitler Youth in Nazi Germany) combine in order to engage the audience. We may not all share rare levels of empathy, but we can be helped on the right path, to higher ground.

To be a ranger requires not only ‘the knack,’ but also learnt skills, and Taika Waititi’s learnt (and ongoing learning on the job) skills include the use of motif in storytelling. In Jo-Jo Rabbit it is as simple as tracking a pair of shoes. Hunt for the Wilderpeople employs a one-shot montage technique to convey the passing of time, recapping the story so far and moving it on, at times getting nowhere fast, at times covering ground at pace. Both motifs remind us that we leave a trail behind us as we go, which others may follow, paths crossing by purposeful intent or un/lucky chance.

Watching Hunt for the Wilderpeople, I am also provoked to reflect on the Church, as relationships between unlikely people, variously damaged and hurting people, whose lives are brought together by an intermediary who has, at different times, sought both parties out and welcomed both parties in. Who, in turn, come to realise their need of one another, following on from a growing (and perhaps grudging) affection for one another; who discover the need for repentance (which includes reparation and accountability) and forgiveness (which—though necessarily following true repentance—involves commitment to reconciliation) as the ongoing process towards deeply longed-for personal wholeness, societal healing and unity.

There is a scene in the film where Taika Waititi takes on the cameo role of a minister conducting a funeral, in which he notes:

Minister: “You know, sometimes in life, it seems like there’s no way out…like a sheep trapped in a maze designed by wolves…And you know that if you’re ever in that situation, there are always two doors to choose from. And through the first door…oh, it’s easy to get through that door and on the other side waiting for you are all the nummiest treats you can imagine. Fanta, Doritos, L&P, Burger Rings, Coke Zero. But you know what? There’s also another door, not the Burger Ring door, not the Fanta door; another door that’s harder to get through. Guess what’s on the other side? Anyone want to take a guess?”

Minister: “You would think Jesus. I thought Jesus the first time I-I-I-I came across that door. It’s not Jesus. It’s another door. And guess what’s on the other side of that door?”

Minister: “Jesus. Yeah, Jesus. He’s tricky like that, Jesus…So let us pray, to Jesus, please, and make it a bit easier to get through those doors, uh, to find you and your bounty of delicious confectionary.”

It is touchingly awkward, and yet profound. For in the initially disorienting space between the door and the door beyond the door, Jesus does indeed meet us, hidden in plain sight, and help us get through. That space, it turns out, might be a million hectares of New Zealand native forest (or, conversely, in Jo-Jo Rabbit, a cramped false room in an attic) or our own homes in a bungled pandemic lockdown. While we are here, you could do worse than watch (or re-watch) Hunt for the Wilderpeople. Who knows what you might find?

Posted by Andrew Dowsett at 4:21 am No comments: