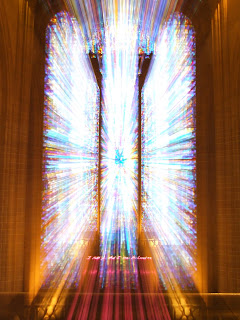 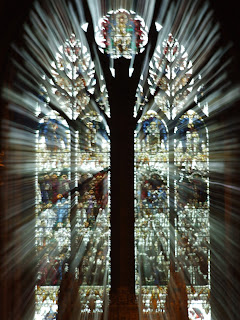 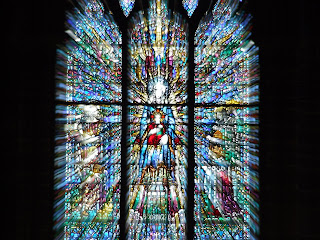 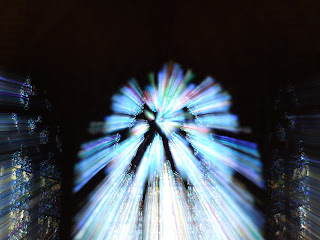 Some photographs I took of the stained glass windows in Liverpool Anglican Cathedral, on a photography workshop yesterday: Angel of the North West; Crucifixion :: Resurrection; Nativity; Death has been swallowed up in victory.
Posted by Andrew Dowsett at 8:16 am No comments: 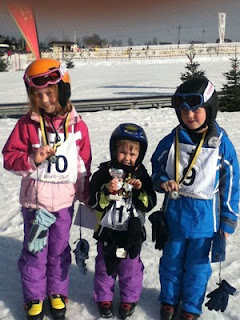 We are back home after a wonderful family holiday skiing with Jo’s parents in Ellmau, Austria.  It was a series of firsts: Elijah’s first (and second) time on a plane; Elijah’s first time in Ellmau, and Susannah and Noah’s first time there in winter; Jo and my first ski trip in fourteen years (too long!).  The kids loved ski school (on the whole).  We ate and drank, and went to bed early, exhausted, and ached in the mornings and the late afternoons.  On the last day of skiing, the kids all raced in a time-trial slalom, a field of around 23 beginner skiers, in which Elijah came second and was presented with a trophy on the podium (first trophy on the mantelpiece).  The snow was poor – it hadn’t snowed for a couple of weeks, so we were dependent on snow machines, and off-piste the slopes were more green than white – and by the afternoon the pistes were a choppy sea of sugarbanks, but we still managed to get plenty of skiing in.  And on the last afternoon, we all took the chairlift up higher and skied down behind Grandad, stopping halfway down at a mountain hut for gluhwein/hot chocolate.  I am so proud of our kids – great followers.

Posted by Andrew Dowsett at 8:08 am No comments:


Mike Breen posts very helpfully on how immature apostles, prophets, evangelists, pastors and teachers impact others, here.  Immaturity, of course, does not imply wilfully bad behaviour (though that happens), but describes the condition of not yet having been discipled to maturity: just as children are appropriately immature, it is a good starting point, though a bad place to remain, to not grow-beyond into maturity.

Mike’s focus is primarily what apostles, prophets, evangelists, pastors and teachers look like leading missional communities.  While all disciples are called to make disciples, not everyone is called to lead missional communities; most are called to some other vocation – and, indeed, many who lead such communities are bi-vocational.  I am particularly interested in helping disciples who are called into any workplace context to be there as an apostle, prophet, evangelist, pastor or teacher – pioneering, or consolidating, the kingdom of heaven in the world.  And recognising the patterns of immaturity is actually one way in which we come to discern what God has made us to be – in order that we can then invest in growing into a mature expression of our identity.  [Disclaimer: this is, of course, only one part of the discernment process!]

So here is somewhere to begin:

You might be an apostle if your CV shows that you have a track-record of starting new careers and quickly dropping out and trying something else (though this may simply indicate an extreme lack of self-discipline); or if you have been successfully involved in developing several start-up or short-term projects, but these have either failed to translate into something long-term or you have struggled to remain effective when they have.

You might be a prophet if you are confident, perhaps even at times over-confident, that you see how a structure (such as an organisation: your workplace, the government) or system (ethos to a workplace, way of doing things) needs to change – to be more just; or to be fit-for-purpose or ahead-of-the-game in a changing future – but you struggle to involve other people, who may be better equipped to communicate the need for or actually implement that change, because to do so would inevitably require and result in a compromise of your ideals.

You might be an evangelist if you operate as a ‘salesperson’ (not necessarily in a formal sense) for a particular product, or in ‘public relations’ for a particular organisation.  This may include yourself, your own ability – and where this is perceived to be aggressive, as it may often be, it may have resulted in unpopularity.  You may be an evangelist if you struggle to accept that others do not share your passion, or respect their right to not do so.

You might be a pastor if you regularly find yourself a trusted confidante, because you affirm people in their disputes – genuine or perceived – without asking them to see the other person’s perspective, or challenging their attitude or behaviour.  You may well have a strong desire to avoid conflict at all costs.  You might be a pastor if you need to be needed – which may be manifest in nurturing co-dependency.

You might be a teacher if you have a love of learning – within your particular field, or any sphere – for the sake of acquiring knowledge, even the status of ‘expert,’ but lack confidence to – or even any interest in – passing learning on to others.

Posted by Andrew Dowsett at 12:58 pm No comments:

Living According To The Grace We Have Been Given


I have spoken/written on many occasions on how I read Ephesians 4:7-16 –

that God has made each one of us primarily as an apostle, a prophet, an evangelist, a pastor or a teacher;

that this primary role is nuanced by the degree to which God has gifted us, and by his drawing us into seasons of functioning in each of the other four primary roles;

that when we enter into his kingdom, we offer ourselves to the service of the king, who in turn gives us to his body – the church – as gift;

that each type of person plays a different, and necessary, role – but that our different approaches can cause real tension, even conflict, and so we must learn how we differ and how to work together, including confessing our failures and forgiving one another.

This is not a ‘church’ role, but a ‘life’ role – the way in which we are called to play our part in God’s mission to create environments for life to flourish, and preventing life from being overwhelmed by chaos...and at the same time, the way in which we can contribute to the chaos, if we misuse the grace we have been given.

Therefore, it is important to me to find ways of helping people to discover how God has made them, and how to live according to that grace.

One of the things I want you to see is that apostles, prophets, evangelists, pastors, and teachers function in different ways in the same workplace.  To illustrate, consider five British chefs: Heston Blumenthal, Hugh Fearnley Whittingstall, Jamie Oliver, Nigel Slater, and Marco Pierre White.

Heston Blumenthal is a pioneer: absolutely committed to the tradition and discipline of cooking, but always seeking to push the boundaries, to do what has not been done before; to pursue a faithful improvisation, exploring, experimenting, re-inventing, paring back, challenging received wisdom.  In this way, the vocation of preparing food is renewed – called back to, and forward in, its purpose.

Hugh Fearnley Whittingstall is a prophetic voice, in particular addressing the supermarket Empires and the ways in which they exert control over producer and customer alike, and (as a meat-lover, not a vegetarian) excessive cruelty in the production of meat.  In this way, our attitudes as eaters, and the practices of the food industry, are challenged to reflect justice and the care of the earth.

Jamie Oliver is an enthusiast and passionate communicator, who is on a mission to bring people the good news that healthy and tasty eating is not beyond our ability to prepare, in time or financial expense or effort; and to encourage us to pass on what we have learnt to be true, so as to change the culture in which we live.  In this way, the ability to cook is extended to those who previously lacked the knowledge, or even the knowledge that it was possible; and good news is shared, and shared in the face of many bad news stories about the state of our food health.

In many ways, Nigel Slater is the antithesis of Heston Blumenthal, believing that “Real food means big-flavoured, unpretentious cooking.  Good ingredients made into something worth eating.  Just nice, uncomplicated food.”  For Slater, food is about emotional comfort, and physical delight.  His concern is that, in the pursuit of the vocation, the human need at its heart is forgotten.  In this way, chefs are reminded that they do not serve themselves, but others; and that where in focussing on the food the person is forgotten, the vocation has gone astray.

Marco Pierre White was the youngest British chef to be awarded 3 Michelin stars.  But White retired from cooking for customers, and has poured his energy into mentoring apprentices.  Of course, the other chefs I have looked at in this post also train others, but in White’s case it is a primary focus, more than just an aspect of another pursuit.  In this way, the next generation of chefs get their start.

This is just one example, and – as any one example inevitably is – a limited example at that.  The point is to illustrate how different people-gifts serve different roles; that we need all five roles at play; and that the coming-together of roles can create conflict (some combinations more than others) (or blind-spots - some combinations more than others).

What has God given you grace and gifted you to be?  Apostle, prophet, evangelist, pastor, or teacher?  And how might you better work according to that grace?

Posted by Andrew Dowsett at 9:52 am No comments:

This morning we are giving thanks for answered prayer – and for all of you who prayed for Noah.  Yesterday the doctor told us that the cut was too deep to glue, and that Noah would need stitches this morning.  This morning, there was no need for stitches – or even glue.  And there was confirmation that those who had made the decision yesterday were surprised by today’s news.  God is good.
My reflection is this: that to pray is to make a deliberate decision to locate ourselves within the kingdom of heaven.  We may not get what we want, but in choosing to stand there, we receive what we need.
“Let the morning bring me word of your unfailing love, for I have put my trust in you.  Show me the way I should go, for to you I entrust my life.  Rescue me from my enemies, Lord, for I hide myself in you.” (Psalm 143:8, 9)

Today has been very windy here.  The wind caught an external door, and the door caught Noah’s head, and left him with a nasty gash.  He has been to Alder Hey (Liverpool’s children’s hospital) and his head has been cleaned and well-bandaged.  But he needs to go back to the Plastics Department at 7:30am GMT tomorrow [ignore the time-stamp on this post, which is set to Blogger’s default California time] to have his head stitched.  He was quite frightened today, and the hospital staff have told us that they may need to put him under, as he might be too distressed by a local anaesthetic approach.
If you are someone who prays, please would you pray for Noah (aged 8)?  In particular, please pray that he would have the peace to cope and that it will not be necessary to use general anaesthetic tomorrow; and that the rest of our family would know peace too.  Thank you.
“Do not be anxious about anything, but in every situation, by prayer and petition, with thanksgiving, present your requests to God.  And the peace of God, which transcends all understanding, will guard your hearts and your minds in Christ Jesus.” (Philippians 4:6, 7)
Posted by Andrew Dowsett at 12:00 pm No comments:

Posted by Andrew Dowsett at 7:03 am No comments: