“I tell you the truth, if you have faith as small as a mustard seed, you can say to this mountain, ‘Move from here to there’ and it will move. Nothing will be impossible for you.” Jesus (Matthew 17:20)

We use ‘mountains’ as a metaphor for the difficulties we face in our lives, the things that we need to overcome or else they will overcome us. To those we think give up too easily, or exaggerate their problems, we say, “Don’t make a mountain out of a molehill!”

But in the ancient world, mountains symbolised encounters with a deity. The Greek gods lived on . The Jewish god gave Moses the Law on Mount Sinai; passed by Elijah on a mountainside; made his home on earth. Those stories of Jesus set on mountains make an unspoken statement about him: God is present with and in this man. The teaching given on the side of a hill known as the Sermon on the Mount says, this is the new Moses, the new law-giver. Jesus is transfigured, in the presence of those experienced old mountaineers Moses and Elijah, and rookies Peter, James and John, on a mountain top.

Posted by Andrew Dowsett at 6:33 am No comments: 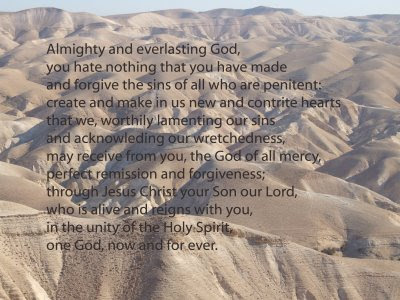 Posted by Andrew Dowsett at 4:45 am No comments: 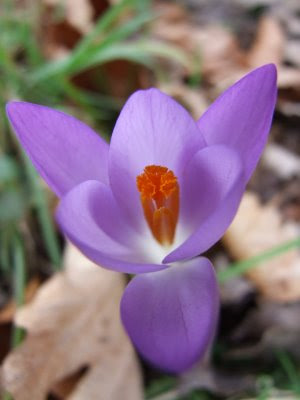 Today I came across crocuses for the first time this year, pushed up through the dead leaves of last year, unfurling their petals in the sunshine, delicate, intricate, amazing in their detail. They always remind me of God's promises, to transform the wilderness into a place of beauty. Today, their reminder was a timely and a welcome one. I've uploaded more photos to my flickr page.
Posted by Andrew Dowsett at 1:09 pm No comments:

Slumdog Millionaire lends itself to a thematic reading, in part because it deals with so many, and in part because it does so in such a complex way: innocence and malice might collide, but there are no black-and-white delineations of Good and Evil here – as in life (less often in the movies) moral fault-lines run through every character, every social structure.

Childhood:
Told from a child’s perspective – a perspective that it equates with a native understanding of truth – this is a film about childhood. In this world, to be a child is to live like a free man even if you happen to live in a prison. It is to live, without any kind of power, as king of all you survey. Indeed, it is their very powerlessness that gives them freedom; for power corrupts and constrains all who grasp for it as they grow into adulthood. Disturbing though it is to be confronted with young children scavenging out an existence on the rubbish dump, it is no less disturbing to be confronted with their zest for life, their peals of laughter. Poverty holds up a mirror to affluence, and affluence is found to be equally oppressive (another theme that runs through the film; Jamal does not go on Millionaire for the money, but to be seen by Latika, in hope of rescuing her from that very oppression). In denying our children means to make their small contribution to the family oikonomia; in denying our children freedom to play unsupervised; in denying our children the room to risk (can you imagine children travelling on the roof of a train!); as an affluent society have we denied our children too much…childhood?

Adulthood:
With the exception of Jamal’s mother, who intervenes to save her boys first from the wrath of the policeman and then from the wrath of the rioters who kill her, and one or two passing characters, adults in this world are essentially malevolent. Children are seen primarily in economic terms, as competition to be removed or commodities to be exploited. Policemen and gangsters alike mistreat them. It is a disturbing world, but not an alien one. According to a recent report by the United Nations, and backed-up by an even more recent report by the Children’s Society, British children are the most unhappy in the Developed World: born as accidents, or fashion accessories; marginalised by parents pursuing their own lives; demonised by the press; moved on by the police…

Prejudice:
Prejudice lies at the very heart of this film, articulated most clearly in the opinion that someone from the slum could not possibly possess knowledge. The quizmaster – who himself has gone from rags to riches - presents this belief to the audience, and their response shows them to be complicit in it. The police move to torture in response to this belief, and so are shown to not only lack knowledge themselves, but also to be morally bankrupt – until Jamal fills in their knowledge-gap and restores their moral judgement. And in all this, a trap is set for the viewer. For the viewer has more education than the quizmaster and the police, and is subtly persuaded to view him- or herself as more upstanding. Like the child Jamal in the privy, the door is wedged shut, and the only way out is to embrace the humiliation of dropping down into the cess pit…

Inter-textuality:
The ‘millionaire’ questions not only introduce flashback episodes of Jamal’s life; they also introduce a series of inter-textual connections. Perhaps most important are two questions Jamal does not know the answer to: the second, for which he asks the audience, the text that ‘truth alone will triumph’ and the final question, for which he makes a guess, identifying the third musketeer. What difference does it make to how we understand the story that (without Jamal’s knowing) truth alone will triumph? What difference does it make to how we understand Salim, Jamal and Lakita to see them cast (even without their knowledge of the characters’ personalities) as Athos, Porthos and Aramis? And what difference do the texts woven into the construction of the viewers make, not only to how we interpret the film but also to how we respond to the themes it confronts us with?

The film Slumdog Millionaire tells the story of two boys, Jamal and his older brother Salim, and a girl, Latika, growing up in Bombay/Mumbai. Most of the reviews I’ve read laud it as an overcoming of impossible odds, two star-cross’d lovers separated by circumstances and reunited by destiny. But I’m not sure how many odds are really overcome: this is not so much a story of triumphing over circumstances as finding ways to be alive in the middle of circumstances which cause others to merely exist. A story of different ways in which we might choose to make the most of injustice; and what happens when those different ways collide.

The central character is Jamal, who occupies a space in-between conventional hero and anti-hero (i.e. a main character in a narrative who lacks traditionally heroic characteristics) roles, overlapping both. He is at once both callow and streetwise. He has a child’s strong sense of right and wronged; his undiminished sense of wonder gets under the skin of the viewer. On various occasions, his life is saved by the more jaded actions of both Salim and Latika – though he is condemned to suffer the bitter consequences of their actions – but ultimately it is arguably Jamal who saves both Salim and Latika from themselves, who brings his fellow ‘musketeers’ to their senses through his determination, and very public humiliation. Add to this his unjustified torture, strung up, electrocuted, and here is one of cinemas sacrificial, penal-substitution atonement, saviours.

Jamal’s complexity questions our moral values. Is it wrong for a hungry child, who has no grown up he can trust to care for him, to steal food? Or to take advantage of ’s official tourism industry? Is it wrong to fail to report to corrupt police that your brother has murdered a man who buys children’s trust for a bottle of coke, only to mutilate them so that they can earn him more by begging, or send them into prostitution? Are our western sensibilities, even those still dressed-up as Judeo-Christian tradition in an increasingly post-Christian society, simply an expression of the luxury of being the Haves in the world?

Jamal’s older brother Salim is his foil, occupying a space in-between anti-hero and petty villain. Whereas wonder gets Jamal through the world more-or-less intact, Salim understands the world, knows that corrupt power is preferable to impotence. Are the differences between Salim and Jamal expressions of different character; or degree? The ways in which Salim looks out for himself are perhaps more extreme; but both boys look out for their own interests, with passion and drive; and both boys, in their own ways, also look out for the interests of those they feel a responsibility towards or affinity to. Perhaps these brothers are closer than they would recognise. In the end, having recognised his shortcomings before God, it is Salim who seeks redemption through doing what he can in order for Jamal and Lakita to be reunited.

Is it always wrong to kill somebody? Or is there a difference between a prohibition against murder, as a bulwark against social breakdown and in a society that is charged with caring for the widow, the orphan and the alien; and the taking of a life as natural justice, where natural justice is the only justice available?

Latika is Jamal’s muse. From the moment she first appears, standing out in the monsoon rain silently but persistently asking for shelter, she stands just outside of Jamal’s world, making his experience incomplete without her. The child Jamal extends care, protection, and in return for this simple but profound gift Latika will give herself for his life. On three different occasions, as a child, a young teenager and a young woman, she sacrifices herself, her own happiness with Jamal, and so doing secures his survival. Is her motive love, or fear; fear that her failure to run will jeopardise his escape, fear that things will go worse for her if she does not give in; or all of the above? In time, her choices mould her life: they win wealth, if not love; and who, from the slums of Mumbai, can live on love alone? For a time, love is too big a cost. Only Jamal’s determination, and Salim’s intervention, will eventually secure her release.

In the final analysis, all three characters need the other two. Knowing only the first two names, and without having read the book, they truly fulfil the musketeers’ motto, All for One, and One for All…

Slumdog Millionaire is the talk of the town this cinema award-ceremony season. In recent weeks, there has been a rash of facebook statuses singing its praises. And it is undoubtedly a film worth watching. But it is also a film worth reflecting on.

The first thing to say is this is a violent film: the foreground concentrated violence against individuals, and in particular men inflicting violence on women and children; and the background violence of having to live in extreme poverty. This is a film that does violence to the viewer, watching in a western society that is complicit in that poverty. Despite the uplifting life-affirming feel-good Bollywood end credits scene, to view Slumdog as escapist entertainment is, surely, to miss the point.

The next thing to say is this is a psychedelic film: dizzying heights, loud noise, bright colour, clever camera angles. This is a film that puts the viewer through a simulated parallel to the mental (though not the physical) torturing of the central character, Jamal, at the hands of a Mumbai policeman. It is challenging viewing.

Posted by Andrew Dowsett at 11:12 am No comments:

Posted by Andrew Dowsett at 5:56 am No comments: 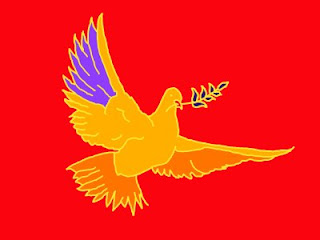 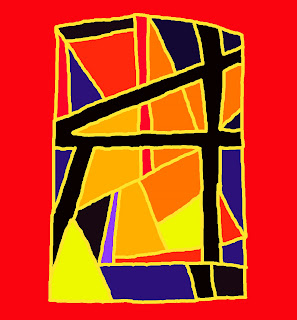 A couple of designs for the Holy Spirit and/or Christian saints and martyrs.

Posted by Andrew Dowsett at 1:28 am No comments: 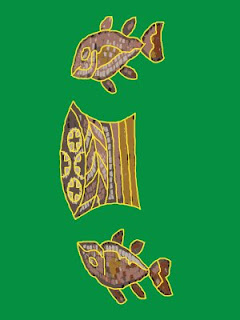 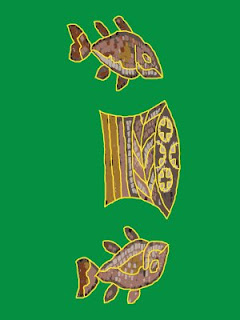 A couple of 'Green' designs for Ordinary Time, which began yesterday.
Posted by Andrew Dowsett at 4:41 am No comments: