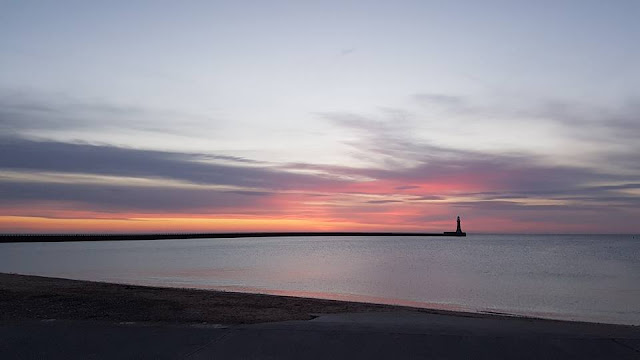 Posted by Andrew Dowsett at 5:58 am No comments:

Email ThisBlogThis!Share to TwitterShare to FacebookShare to Pinterest
Labels: Easter

God came to us, and we killed him. And some of us killed him for love of God; because the tragedy of the human condition – as Shakespeare knew so well, and expressed so powerfully in plays such as Romeo & Juliet – is that, one way or another, we kill those whom we love as much as those whom we hate.

The work of Holy Saturday is to let that sink in, to refuse the impulse to excuse ourselves from the human condition.

Posted by Andrew Dowsett at 9:02 am No comments: 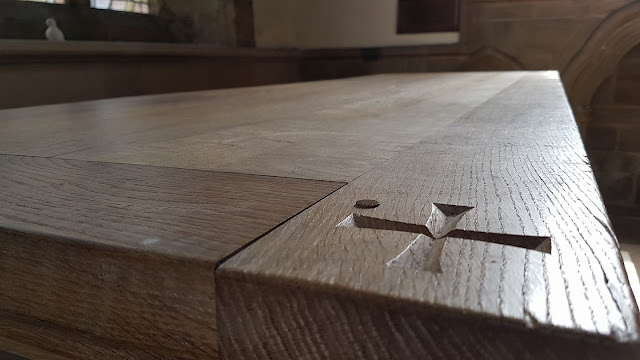 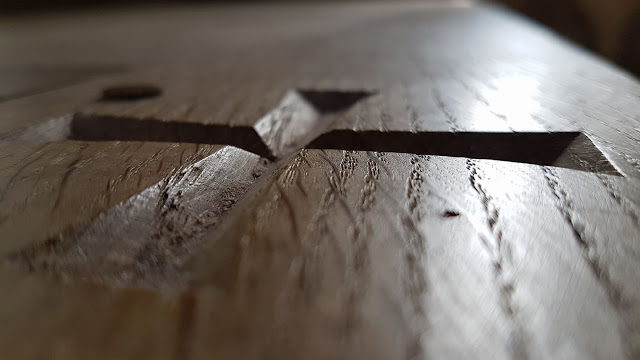 Posted by Andrew Dowsett at 9:01 am No comments:

‘After these things, Joseph of Arimathea, who was a disciple of Jesus, though secretly because of his fear of the Jews, asked Pilate to let him take away the body of Jesus. Pilate gave him permission; so he came and removed his body. Nicodemus, who had at first come to Jesus by night, also came, bringing a mixture of myrrh and aloes, weighing about a hundred pounds. They took the body of Jesus and wrapped it with the spices in linen cloths, according to the burial custom of the Jews.’
John 19:38-40

I am struck that Nicodemus, who had first come to Jesus at night, should come to him again at his darkest hour. Might it be that faith forged in darkness is all the more enduring for it? I think so.

I am also struck by the way in which these early disciples of Jesus were so fearful of the authorities – fearful, and yet overcome their fear. This is also the testimony of my Iranian brothers and sisters, who must appeal before our authorities.

Posted by Andrew Dowsett at 11:35 am No comments: 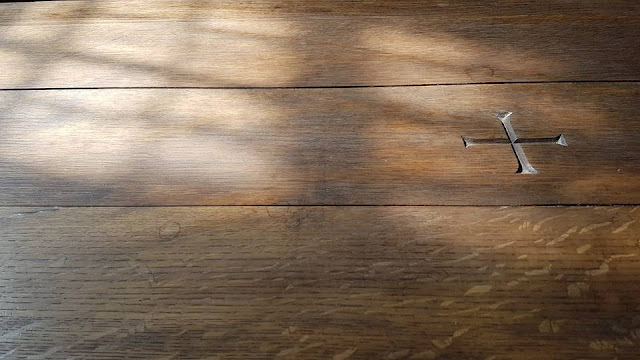 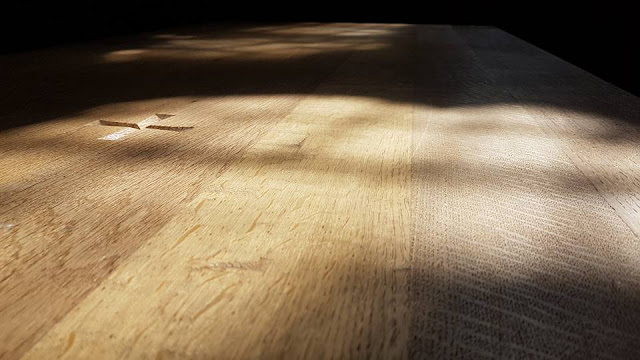 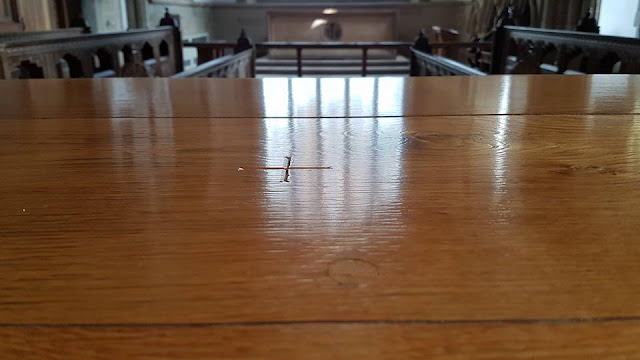 Posted by Andrew Dowsett at 9:08 am No comments:

Morning Prayer:
“One thing I asked of the Lord,
that will I seek after:
to live in the house of the Lord
all the days of my life,
to behold the beauty of the Lord,
and to inquire in his temple.”
Psalm 27:4

Because our bodies are temples to God’s Holy Spirit, poured out on all flesh, we do indeed live all the days of our life in the house of the Lord; are always and everywhere there.

Because God is spirit, and has no physical form, the only way in which we can behold the beauty of the Lord is in that beauty being made manifest in his temple. In me, and in you.

That beauty is made manifest in our brokenness, in the parts we think of as being ugly, those parts of us we don't think are big enough (our love is too small, too thin) and those parts we don’t like about ourselves (such as anger or despair). These are the places God is drawn to, the places where love and light and grace pour in and shine out. The unlikely places made beautiful by our placing ourselves in God’s hands and God taking us up into godself.

This is a holy mystery, revealed to us in the Songs of the Suffering Servant, in the Passion of the Christ.

You are holy ground, beloved and beautiful in God’s eyes. And God’s beauty is revealed in you, broken one.

Posted by Andrew Dowsett at 8:32 am No comments: 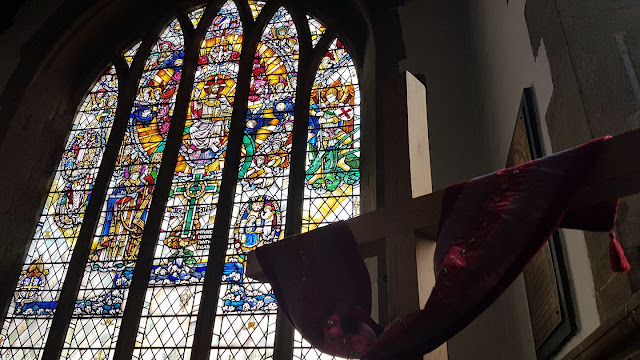 Posted by Andrew Dowsett at 4:55 am No comments:

Freshly risen from the grave – and I know that I am ahead of myself here, but bear with me – Jesus is thought to be the gardener. We take this to be a case of mistaken identity – Mary cannot see clearly through her tears, cannot think clearly in her disorientation – but it is not; at least, not exactly.

Throughout most of the Gospels, we are presented with Jesus’ false self – that is to say, the self that is constructed by the expectations placed upon ourselves, by others and by us; expectations we try to live up – or down – to. Jesus consistently refuses to take such expectations on board, at every turn chooses to listen only to the voice of the Father. You are my Son, the beloved; with you I am well pleased. Nevertheless, the Gospels present us with the false self that others ‘see’ and seek to place upon him. The satan, or Accuser. Jesus’ family. The crowds. His disciples. The Pharisees – both those who are drawn to him, and those who oppose him. Even in their moments of deepest revelation from the Father, Jesus’ followers do not see him as the Father sees him; do not see his true self.

When Jesus dies on the cross, and is laid in the tomb, his false self – the expectation that he will lead a popular uprising to overthrow the Roman army of occupation; to overthrow the puppet king and restore the royal house of David; to bring about reform of the corrupt Temple authorities – dies.

When Jesus is raised from the dead by the Father, his false self remains dead: like the grave-clothes in which he had been embalmed, pressed onto him, weighing down on him, outwardly conforming to his shape but in fact seeking to conform him to the expectations of others.

It is his true self that rises. That is why, again and again in the accounts of his resurrection appearances, we are presented with one who is definitely Jesus but not immediately recognised.

And when Mary sees Jesus’ true self, she sees the gardener. Why? Because, as Paul will write in years to come, his true self is the Second Adam: the human placed in the Garden to tend to it, to irrigate the earth and enable all life to flourish, in unbroken partnership with God.

As we approach Holy Week, we hear again the call of Jesus, take up your cross and follow me. As we come to Good Friday, we are called to die with Jesus. To see our false self – at least, something of it; for this is the work of a lifetime – surrendered into the Father’s hands, and dying under the cruel weight of human expectation, in the hope that what will emerge from the tomb is – something more of, degree by degree – our true self. For our true self is not who we offer to God, but who God offers to us.

What expectations of us need to die this year?

Posted by Andrew Dowsett at 1:38 am No comments:

I love the provision made by the Common Lectionary to remain with John 11:1-45 at Holy Communion every day this week, from last Sunday to this coming Saturday.

Sometimes, that is just what we need…

At the mid-week Holy Communion on Wednesday we included in our number and man whose twin brother had died on Monday, and his wife who had therefore lost her brother-in-law.

At the mid-week Holy Communion on Thursday we included in our number a woman who had heard, just before the service, that her cousin’s husband had died; and a (Methodist) visitor, a woman who came today because it was the first anniversary of her husband’s death.

For each, this was exactly what they needed. To be reminded that Jesus weeps with us; receives our weeping; and that with his presence comes what we need, even (and especially?) when we have no idea what it is that we need.

This story is our story. And in Jesus, God draws near.

Here’s a link to my sermon on this text from last Sunday.

Posted by Andrew Dowsett at 7:11 am No comments:

Morning Prayer:
‘I waited patiently for the LORD;
he inclined to me and heard my cry.’
Psalm 40 verse 1

The stillness is our part; the movement is God’s.
Be still, o my soul.

Posted by Andrew Dowsett at 7:08 am No comments:

This morning at Morning Prayer I read Psalm 55 – ‘And I say, “O that I had wings like a dove! I would fly away and be at rest; truly, I would flee far away; I would lodge in the wilderness; I would hurry to find a shelter for myself from the raging wind and tempest.’” – with one of our asylum seekers; and, at Holy Communion, read John 11:1-45 with someone whose brother has just died.

These are not just words on a page. They are our story.

Posted by Andrew Dowsett at 11:17 pm No comments: