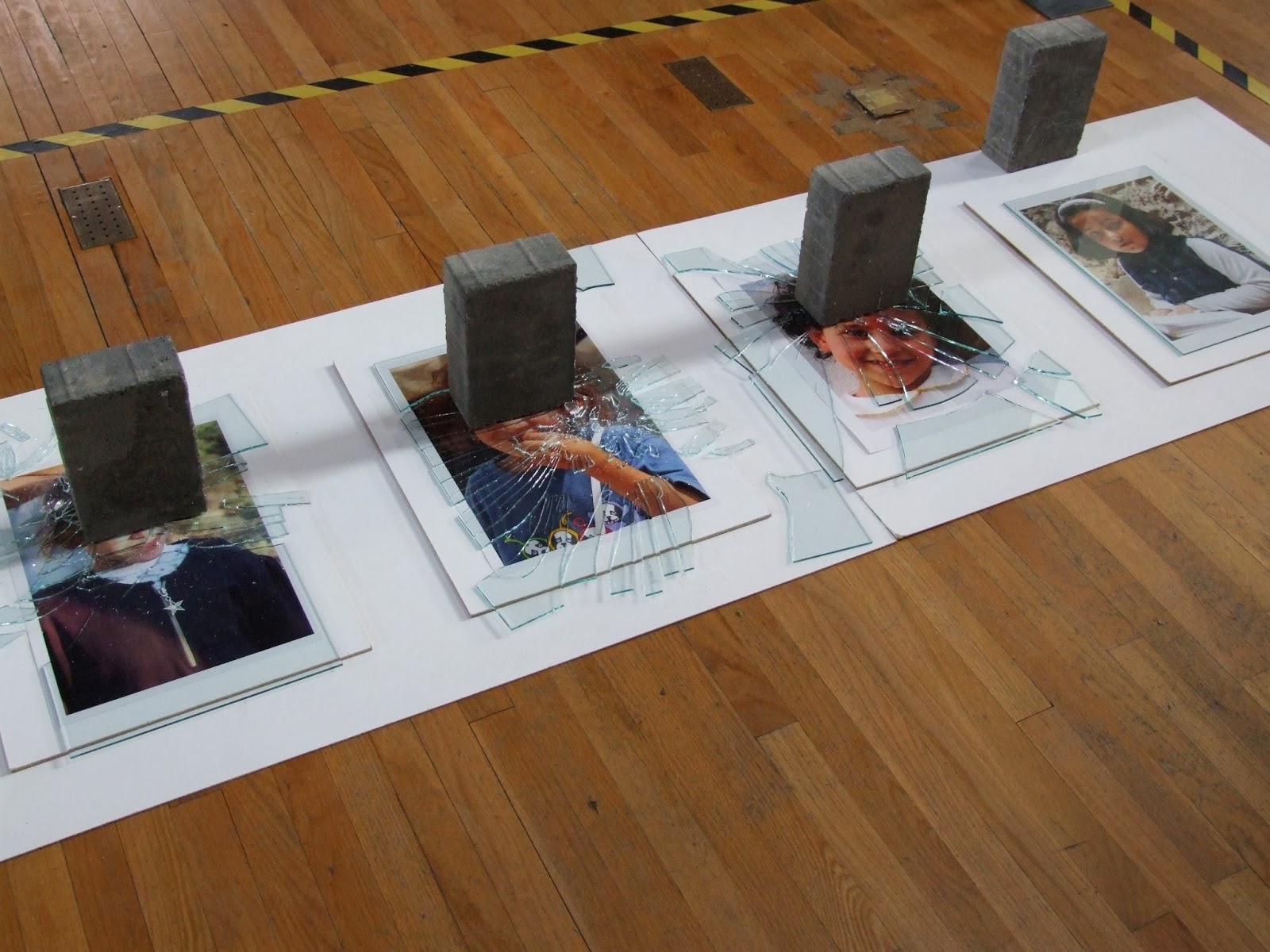 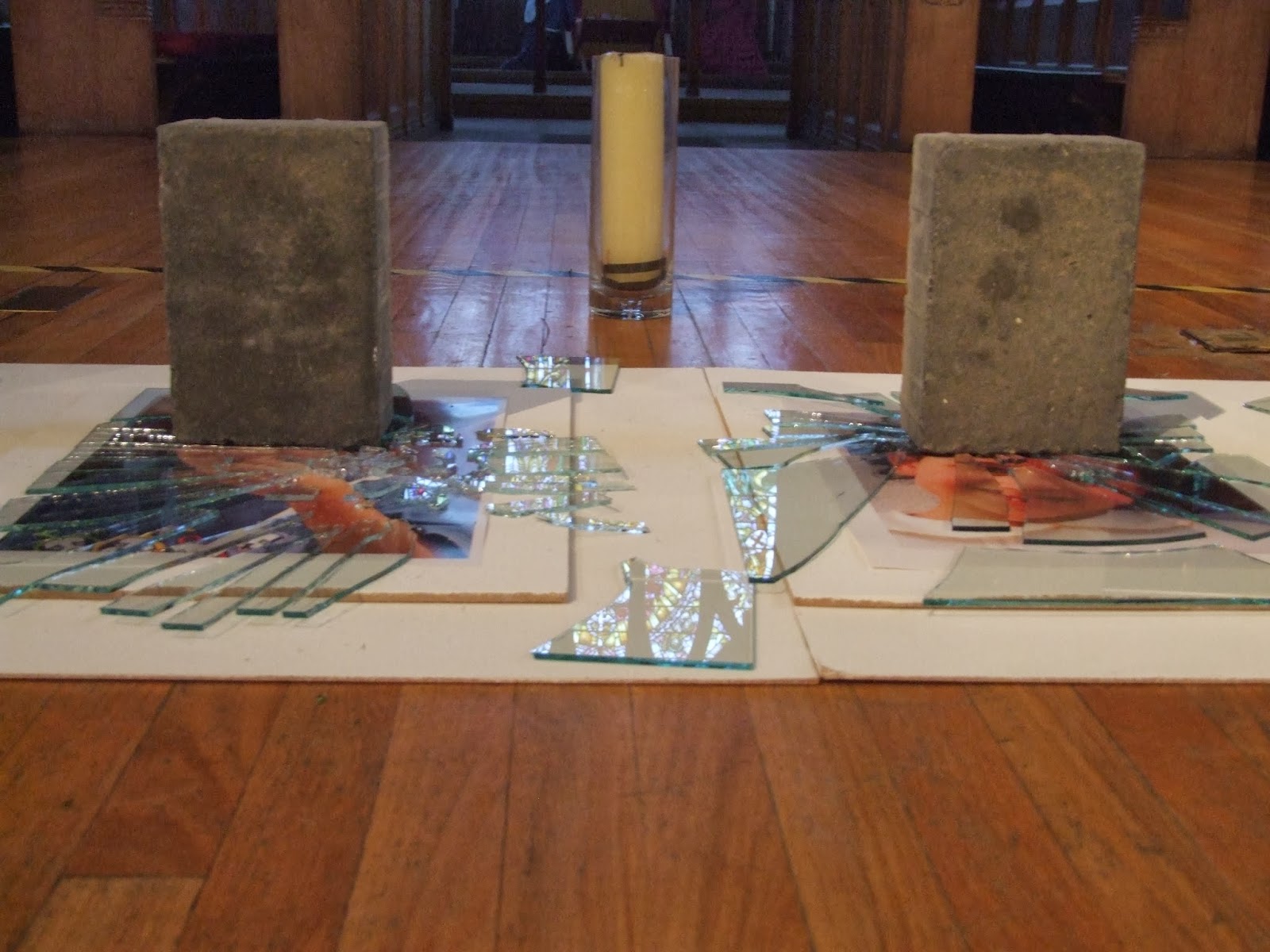 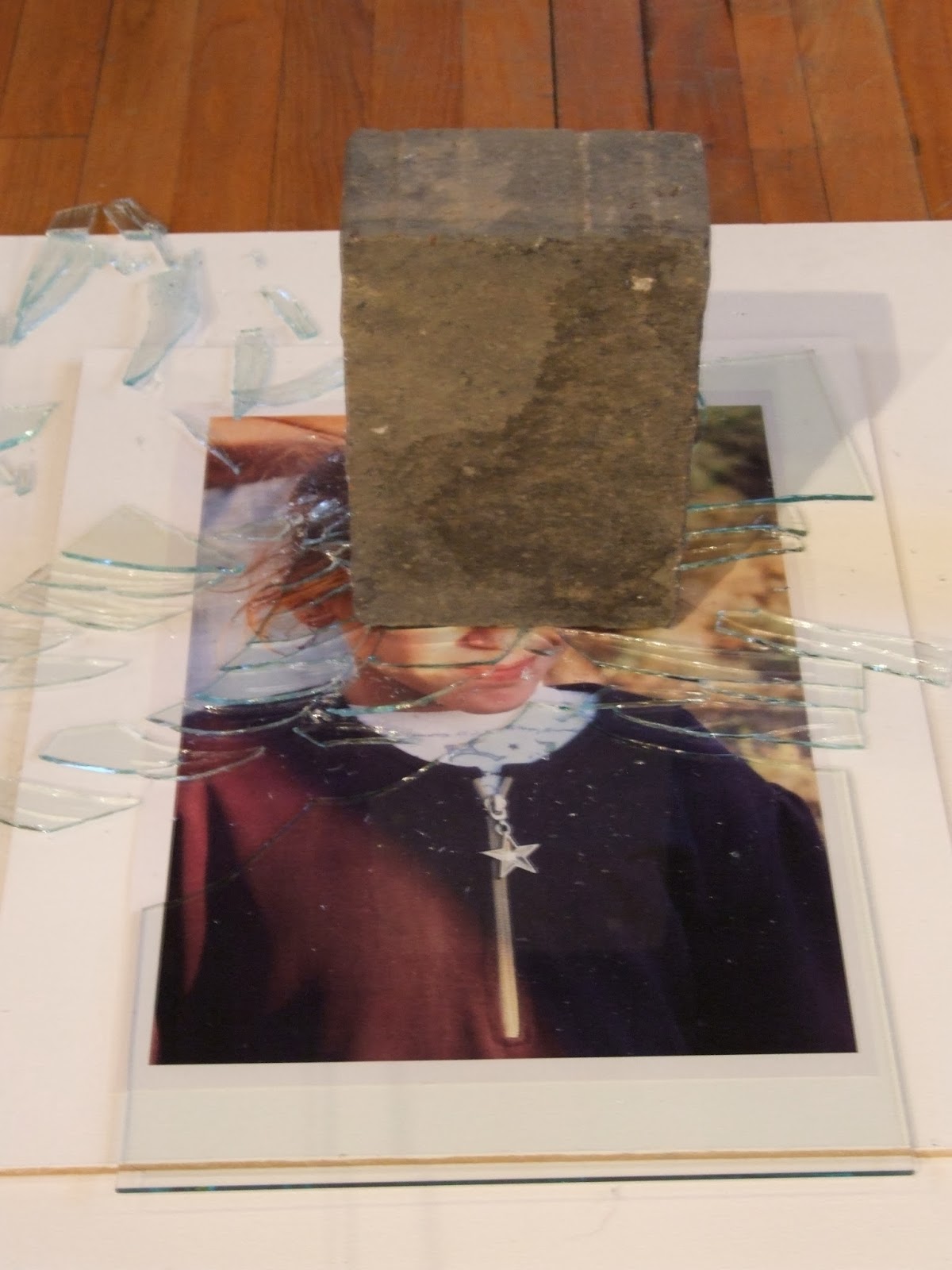 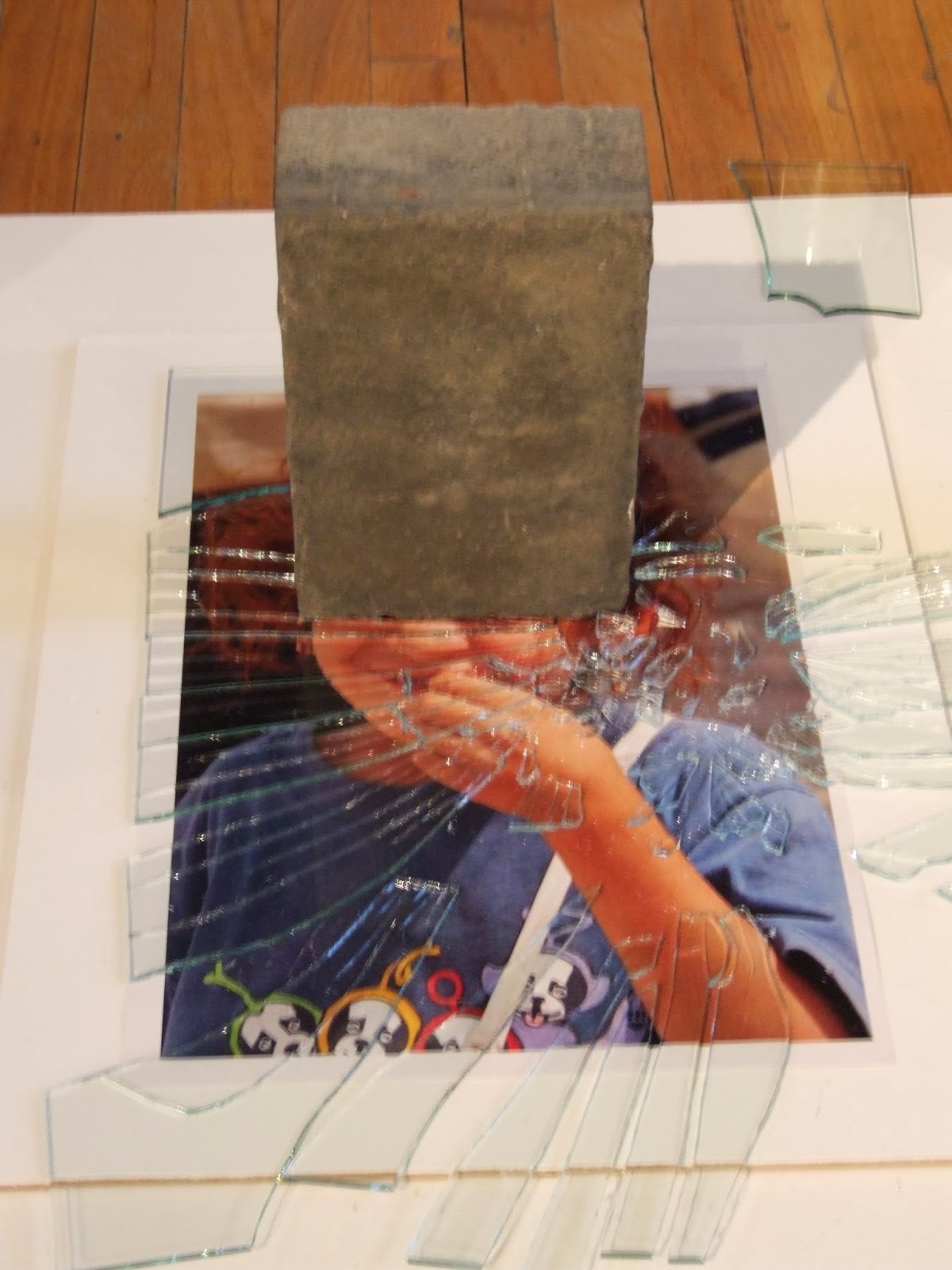 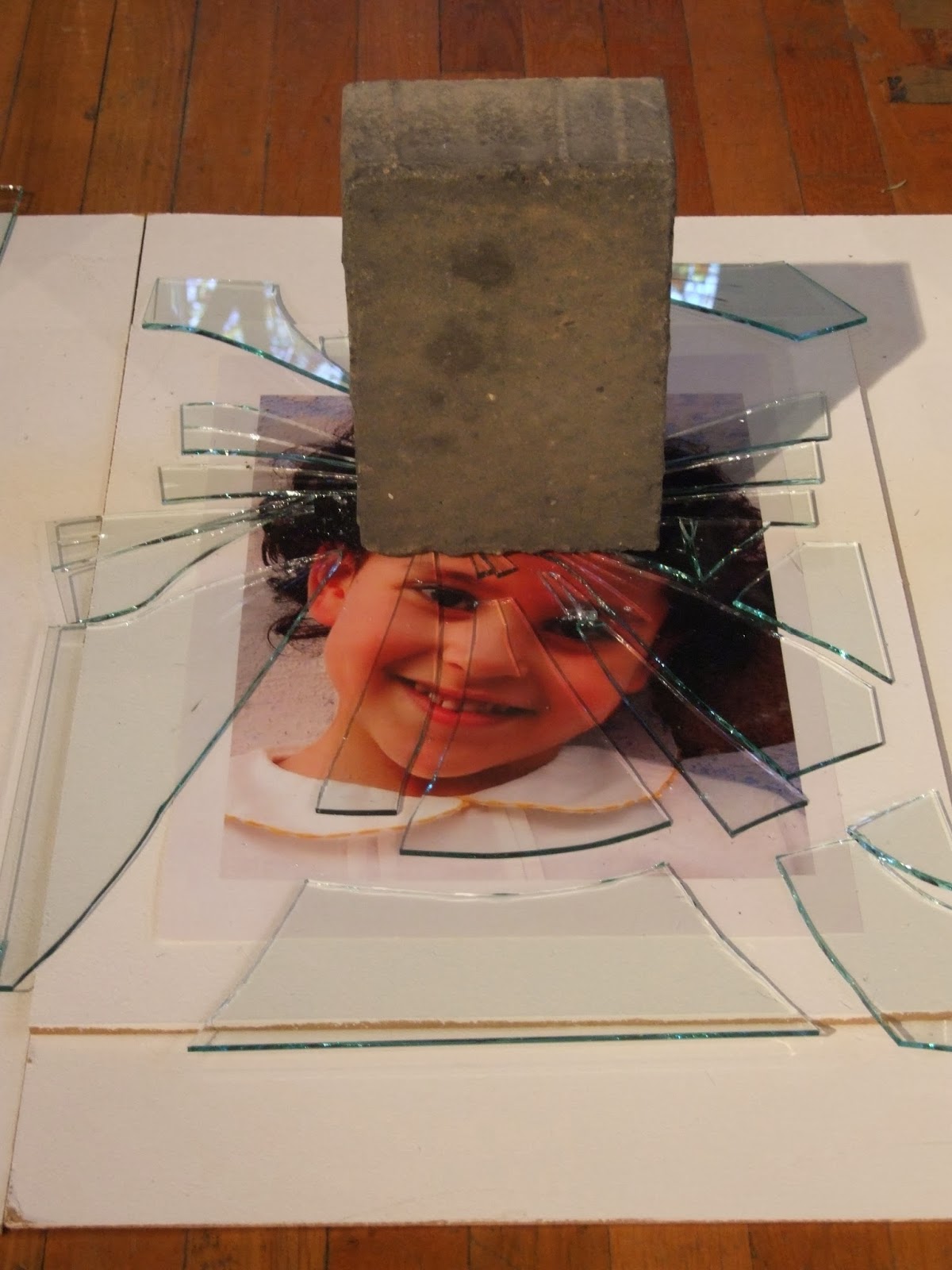 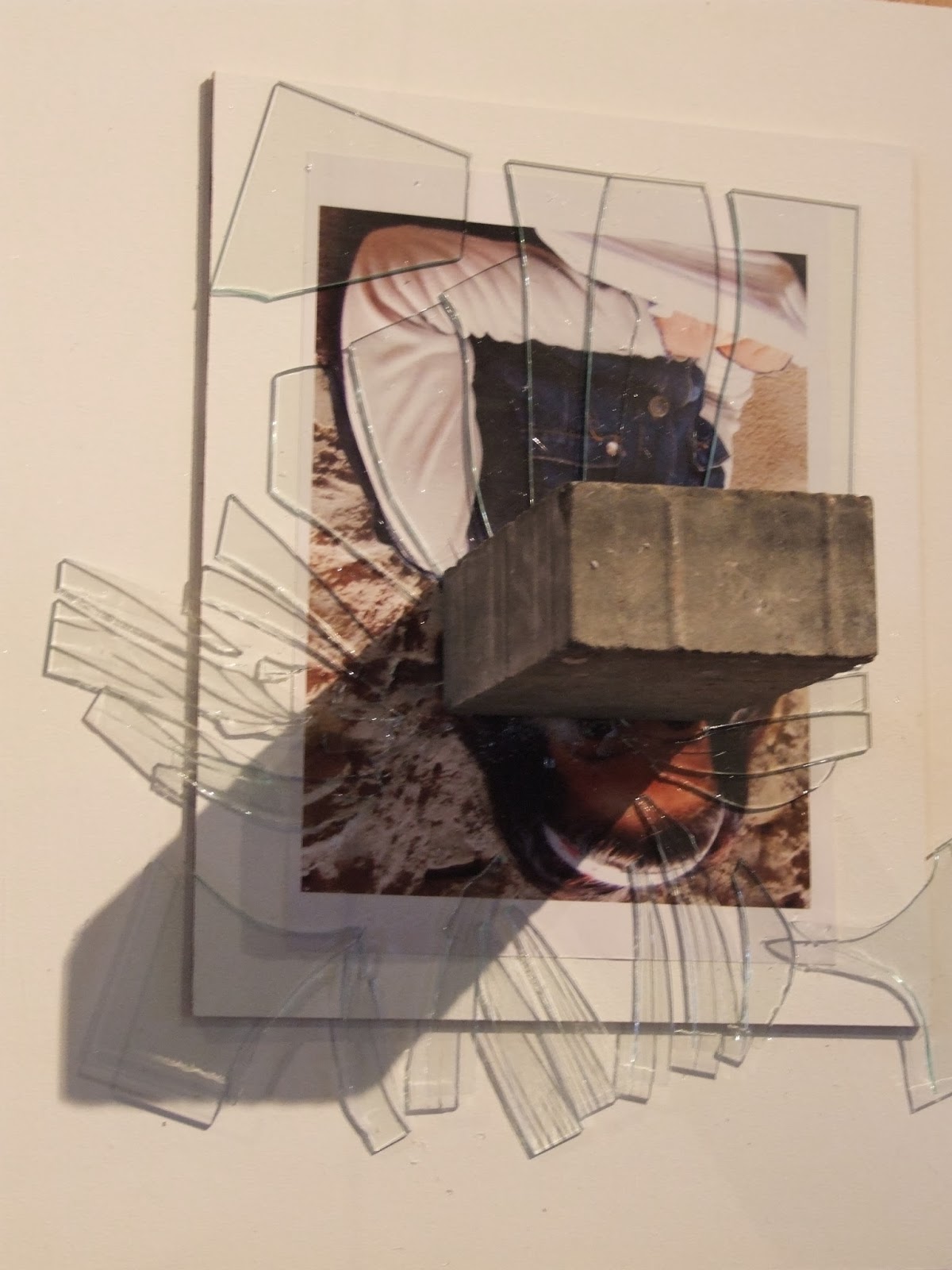 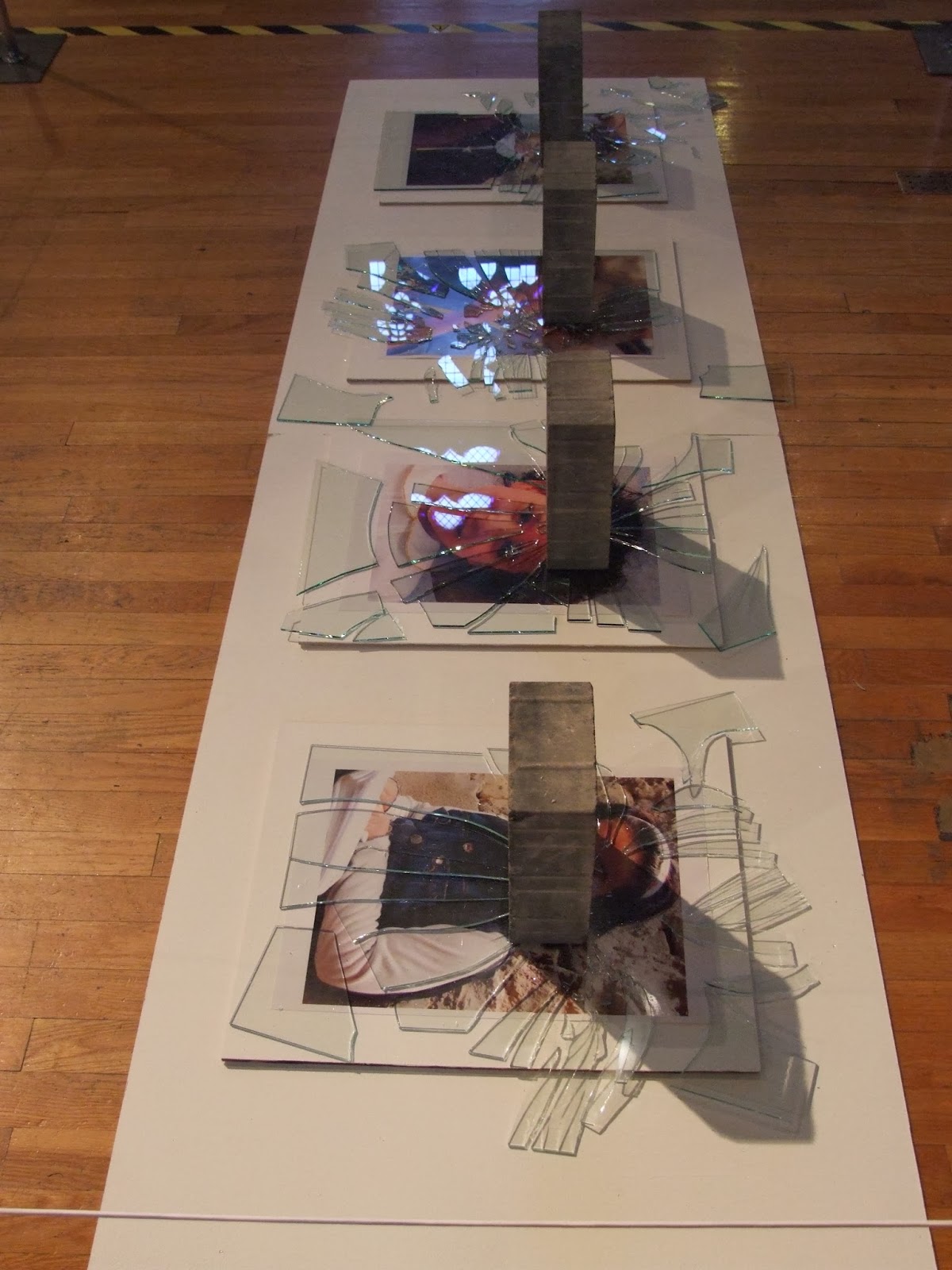 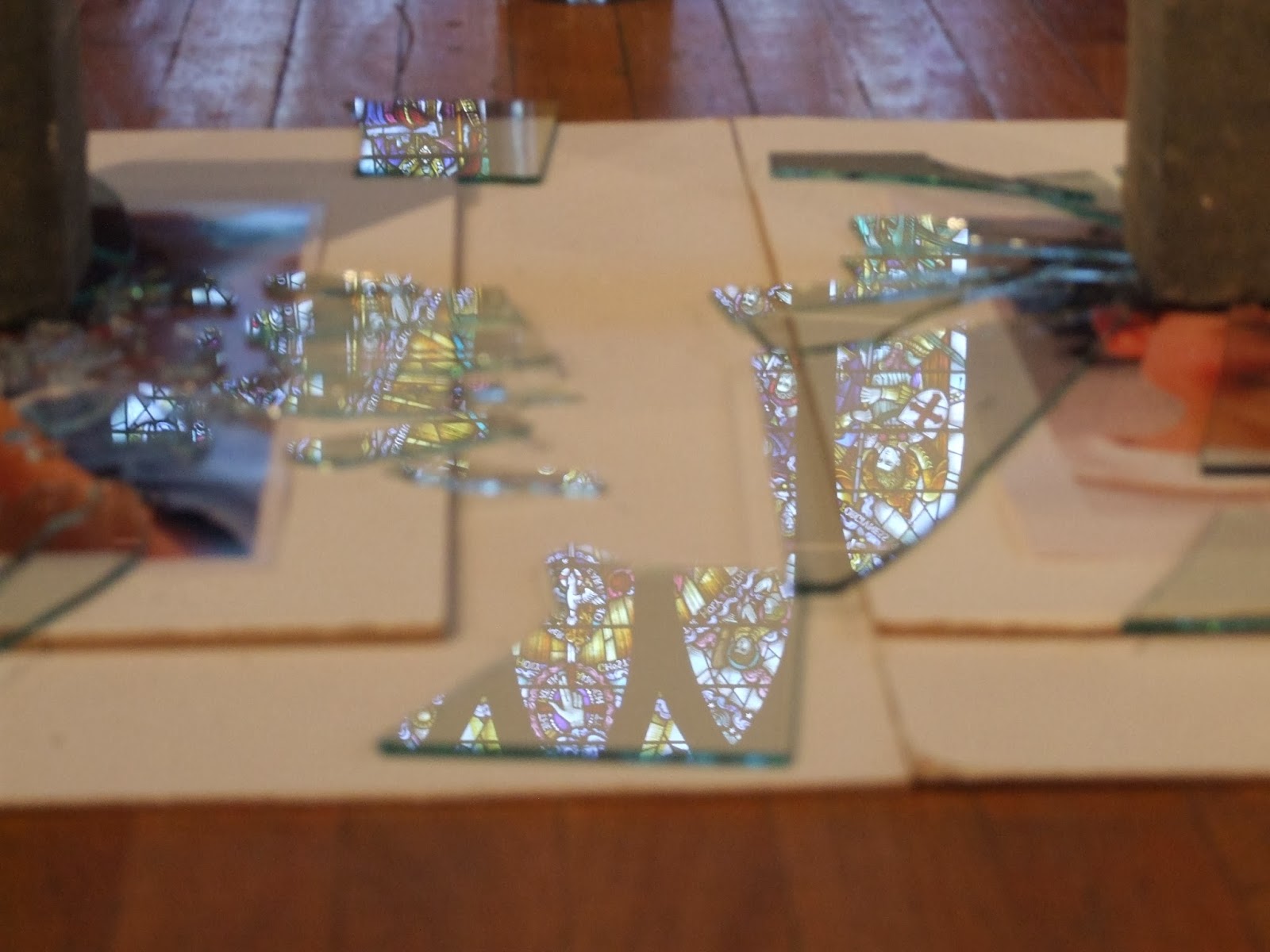 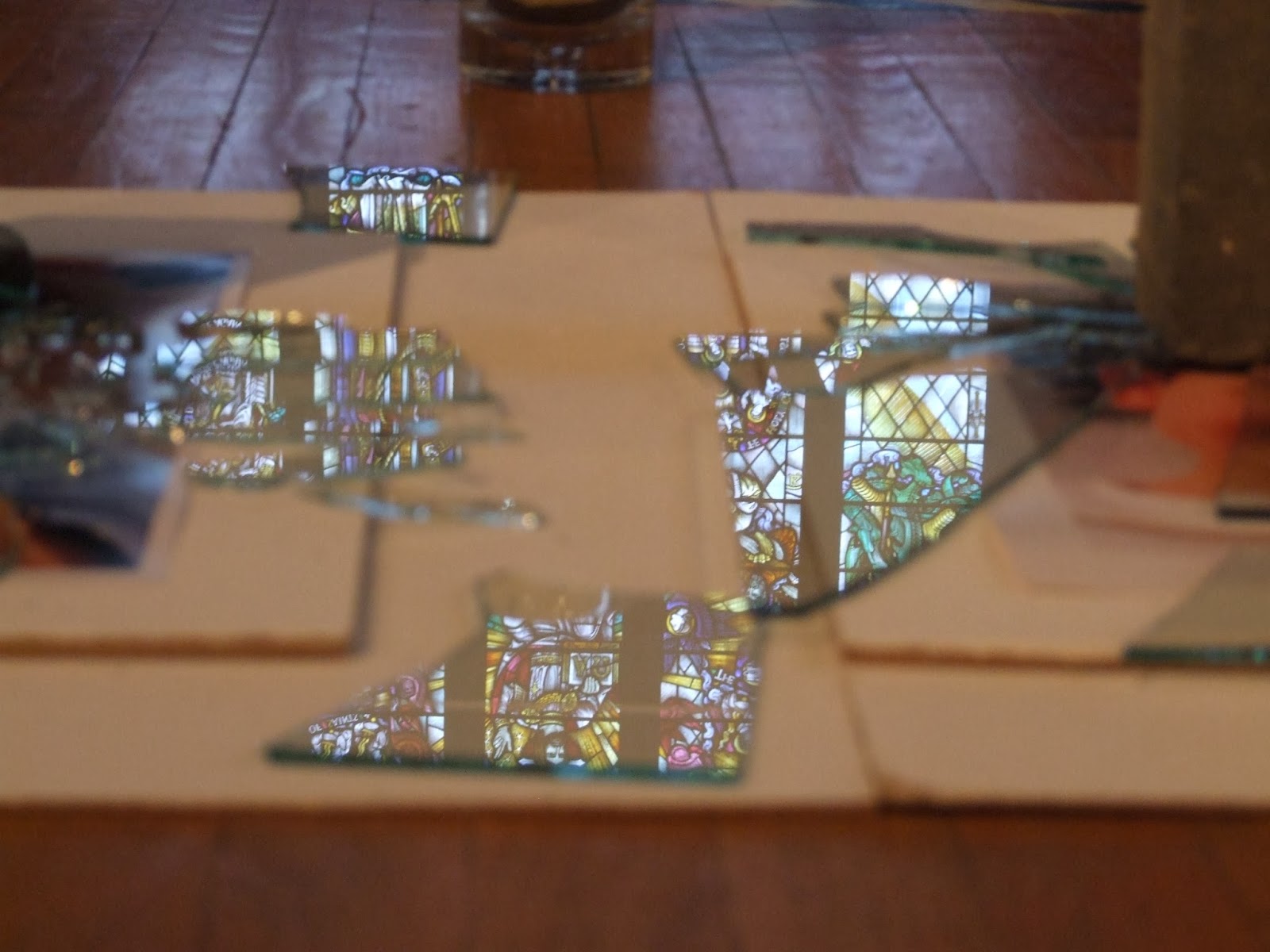 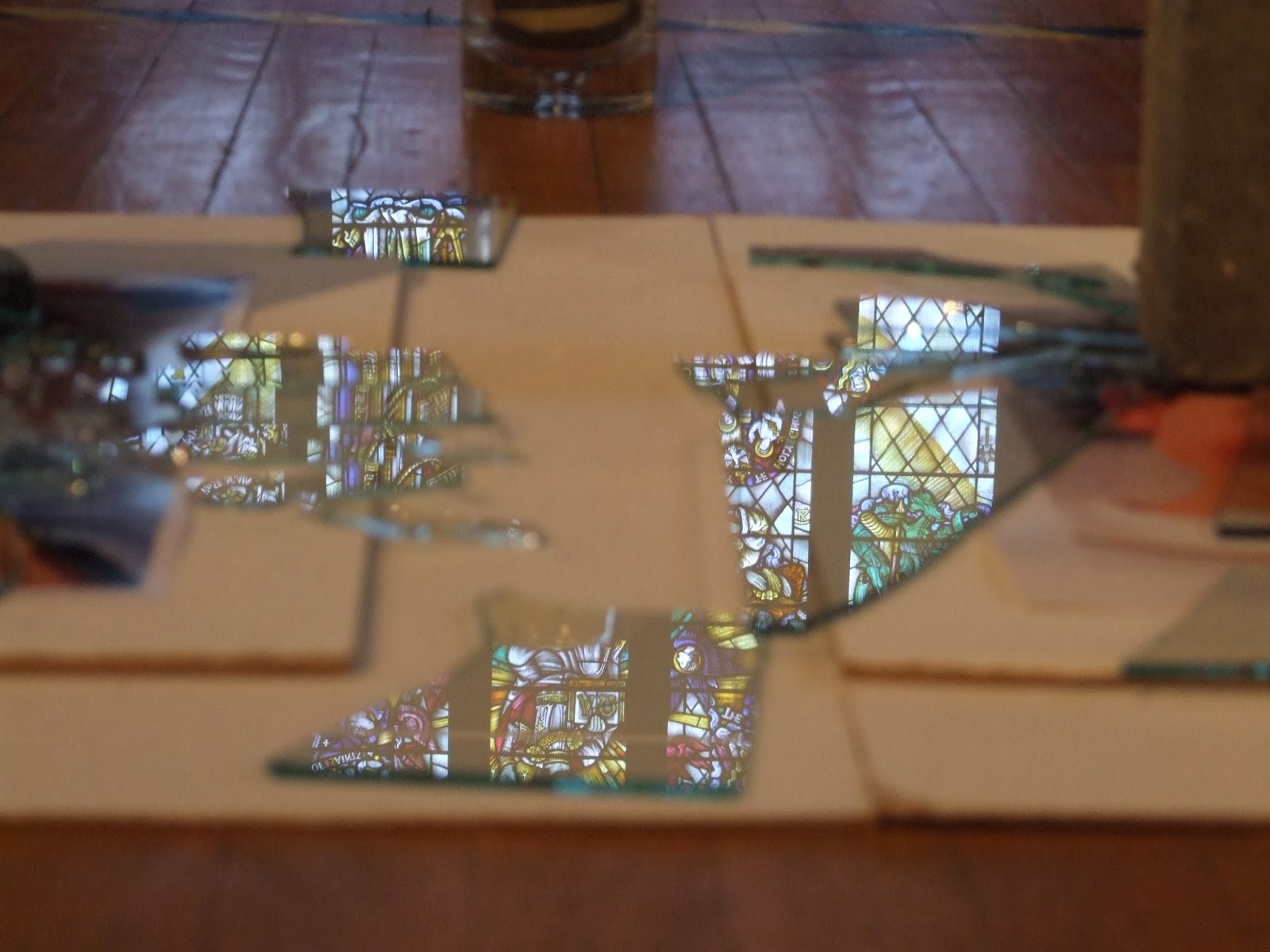 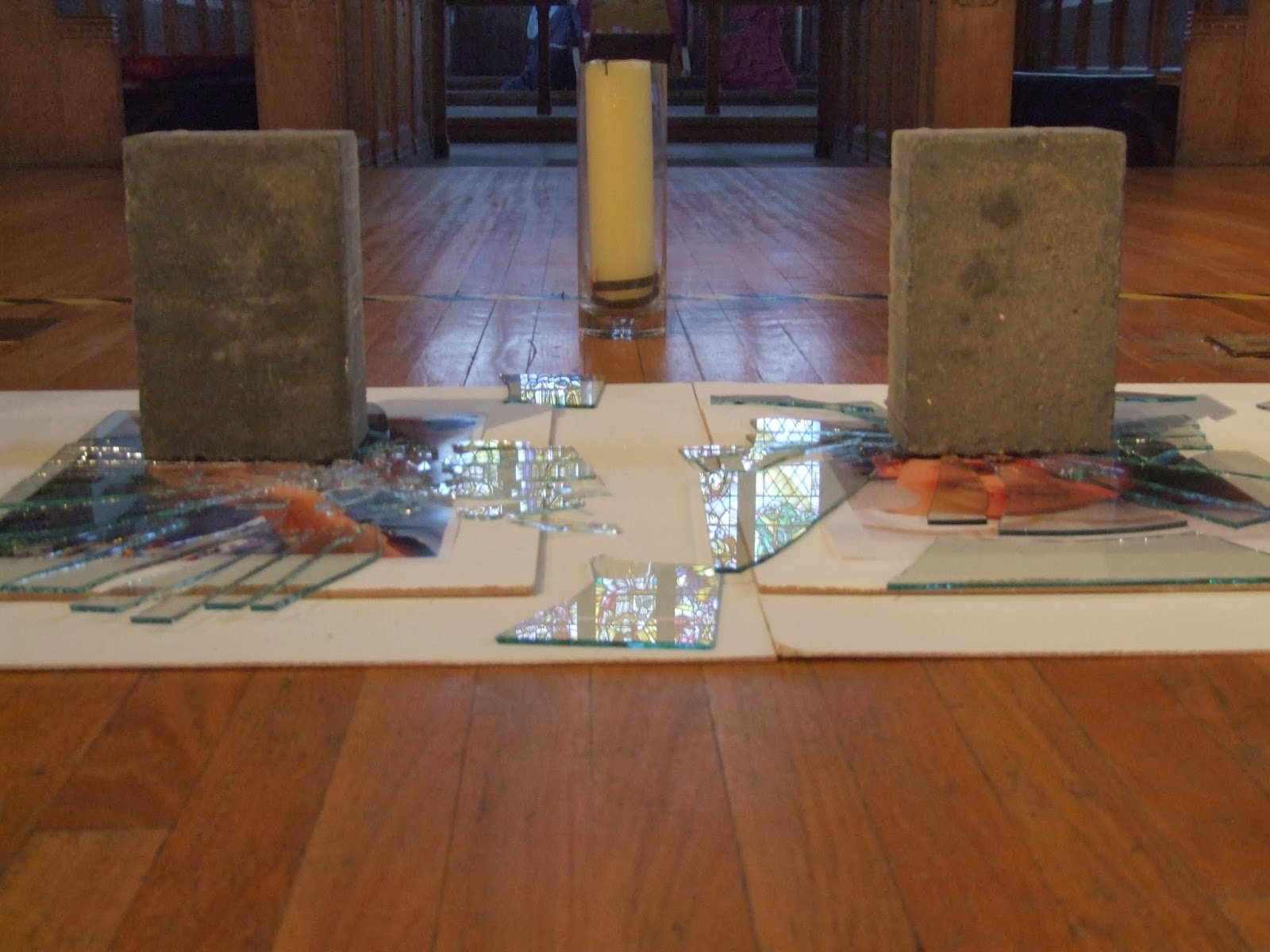 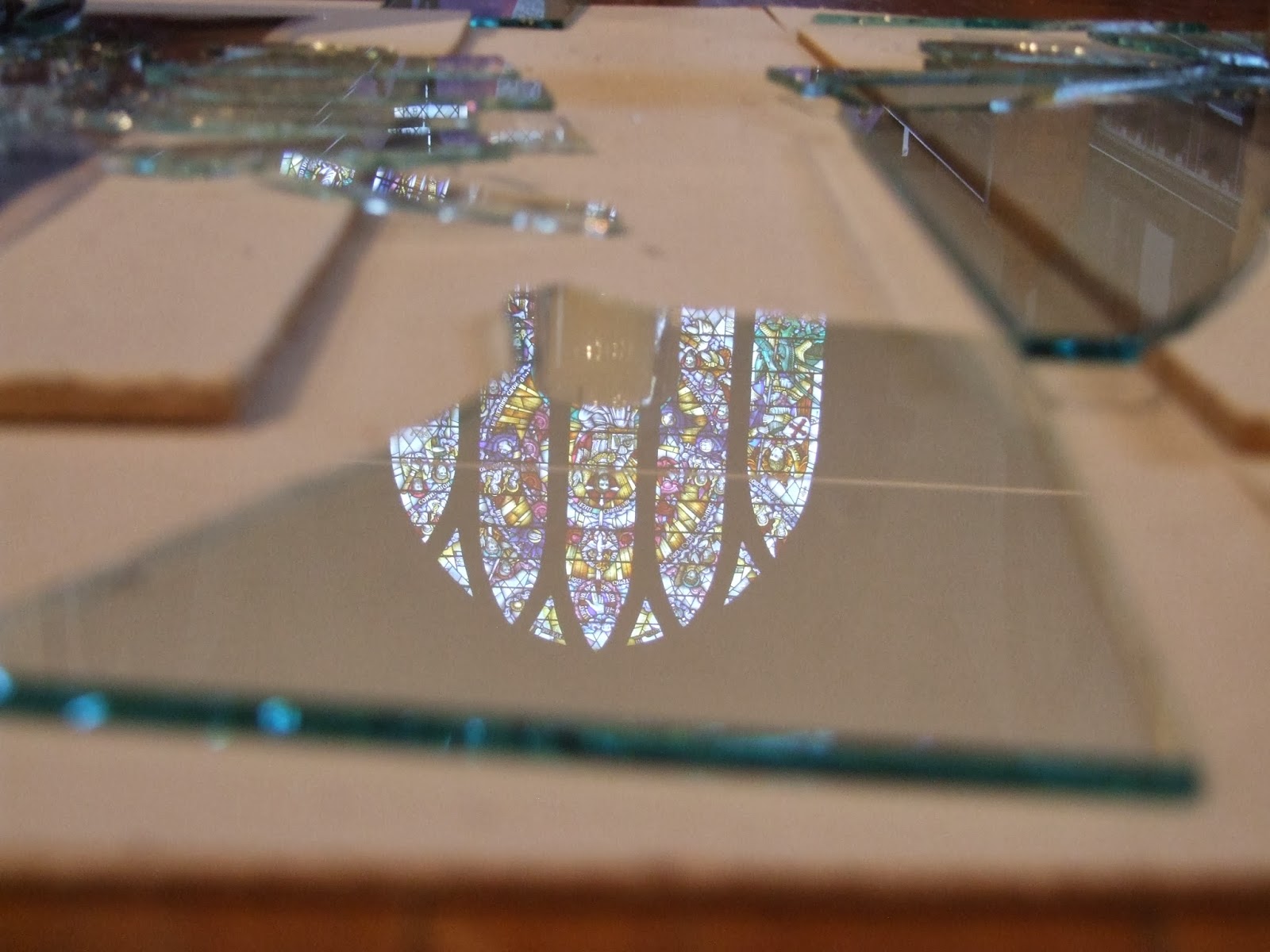 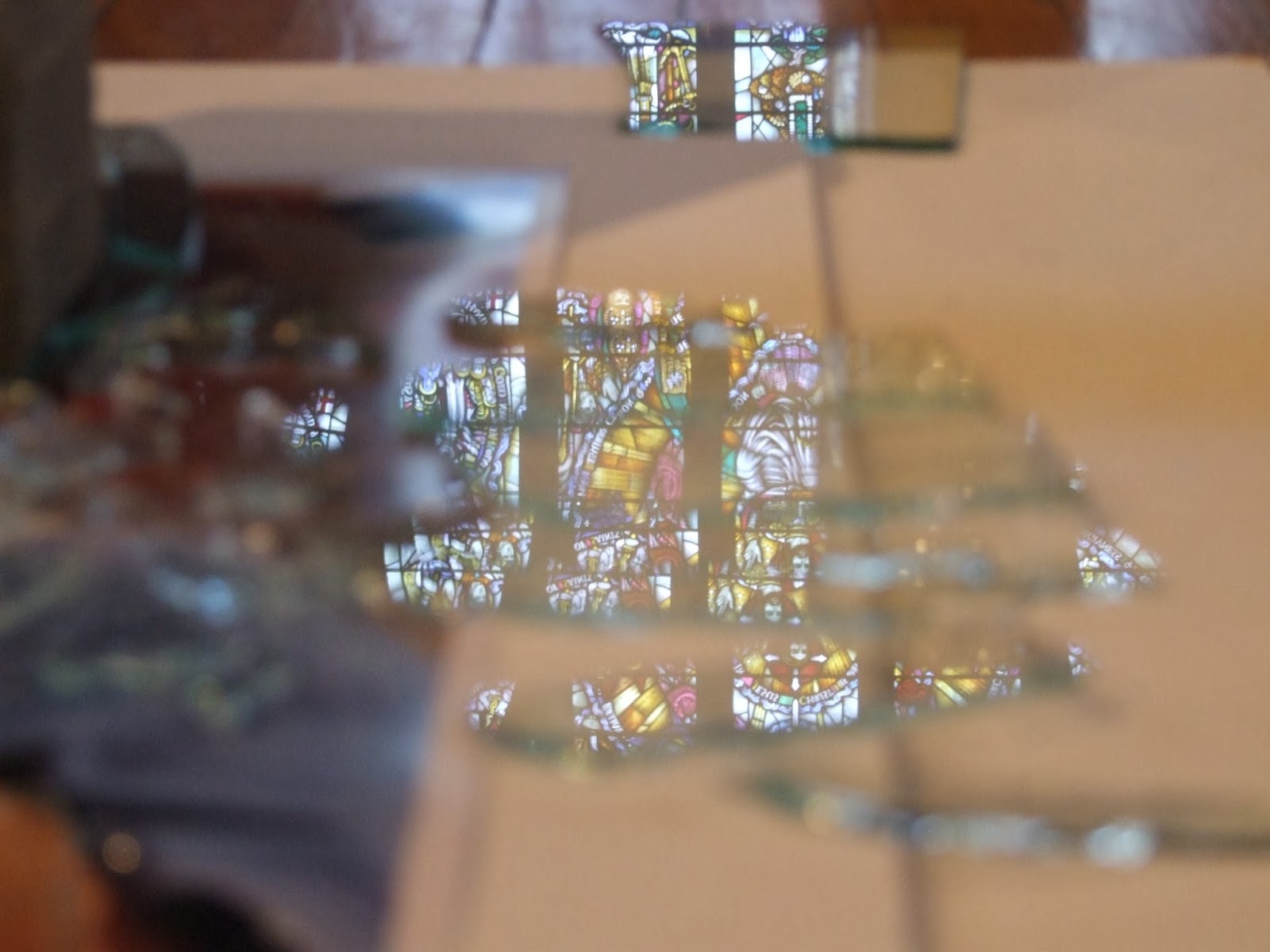 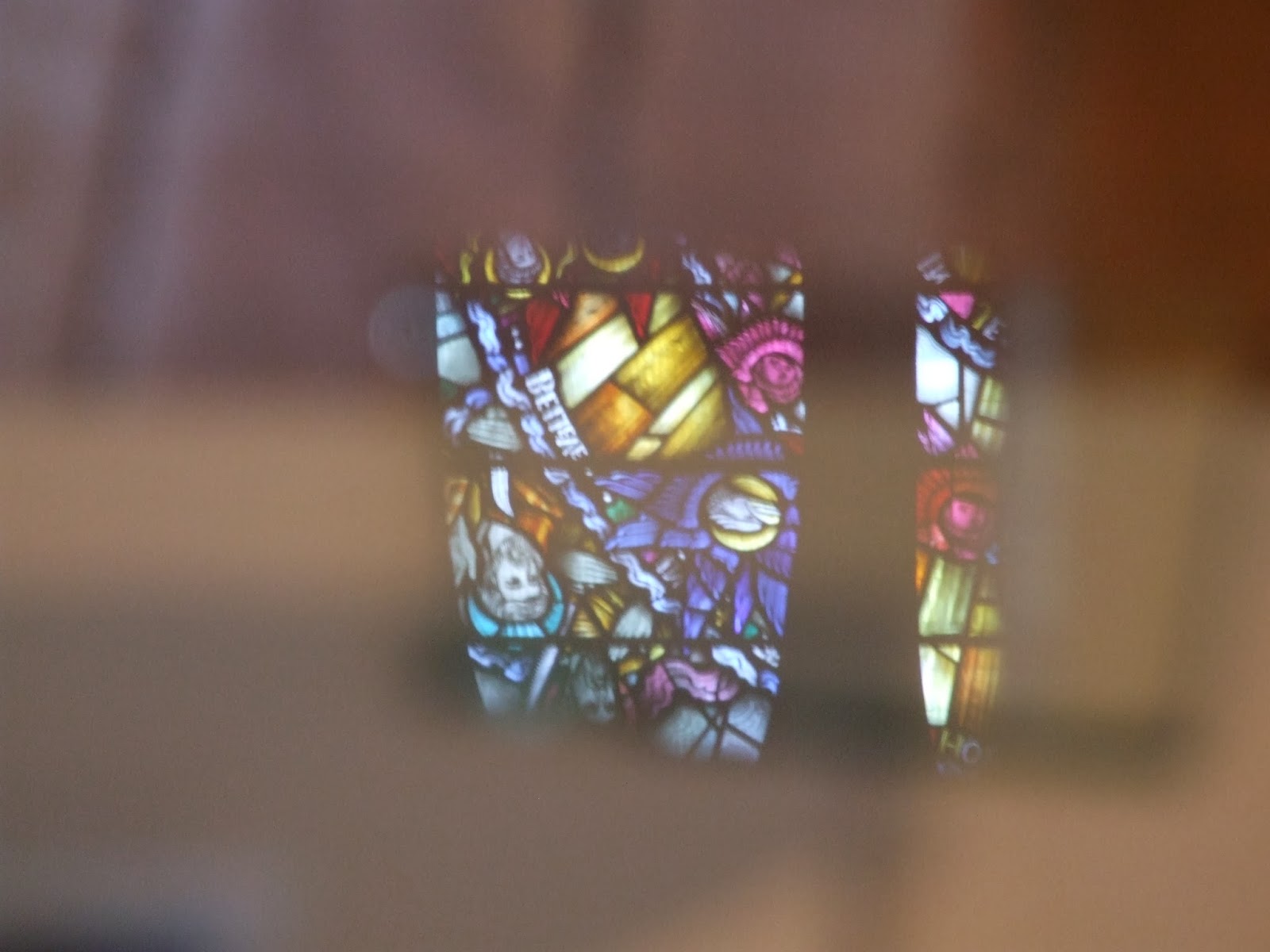 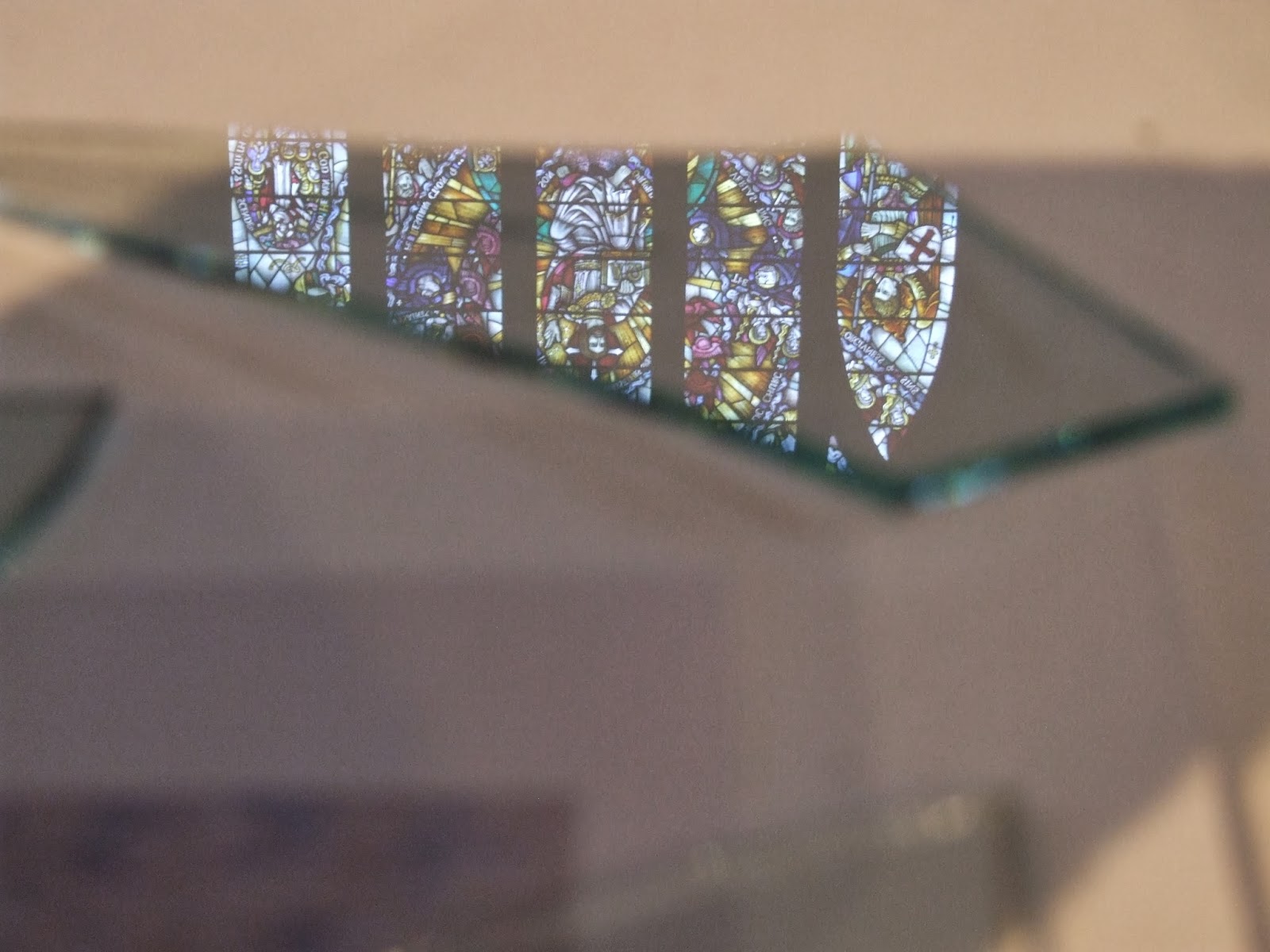 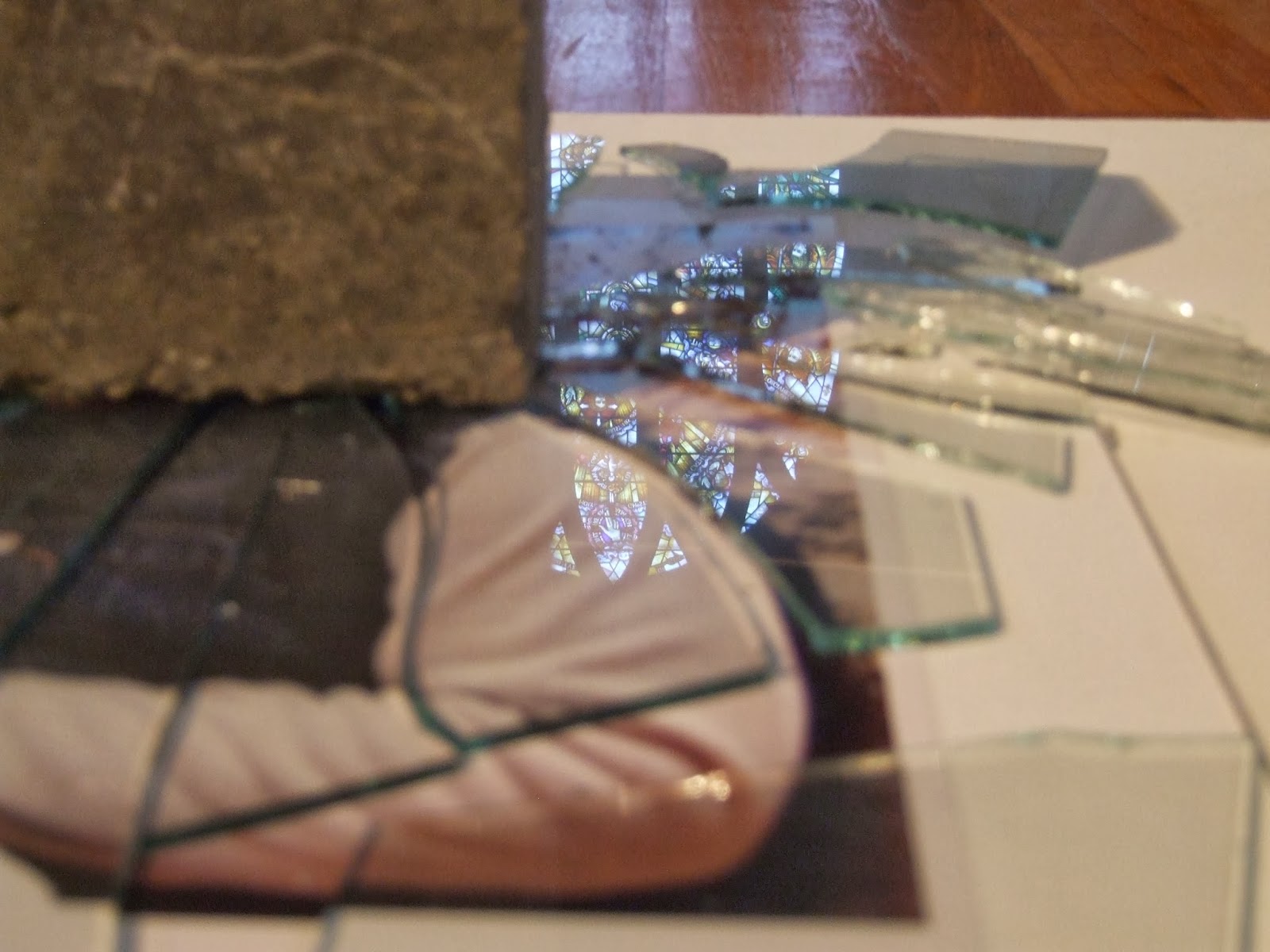 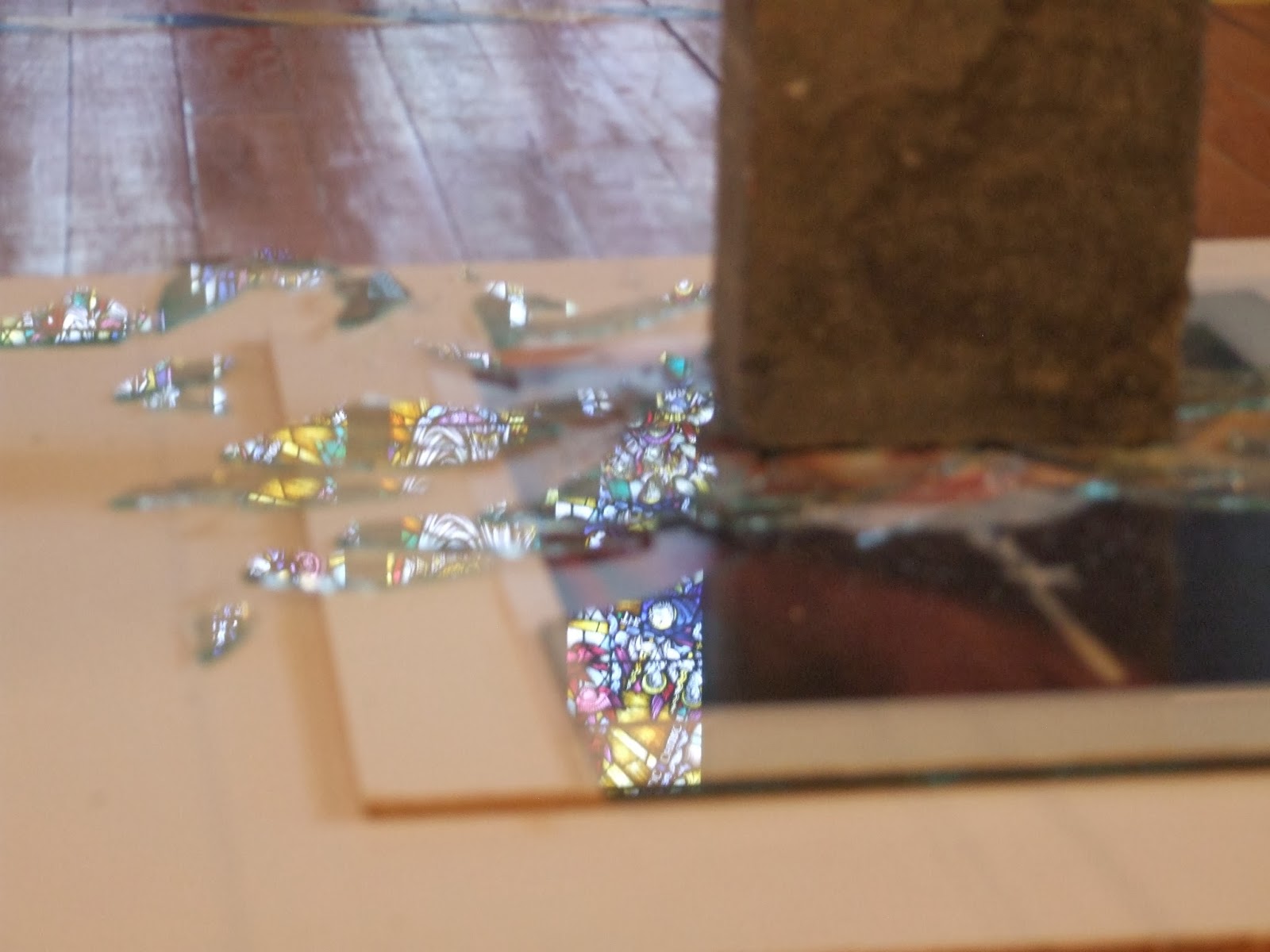 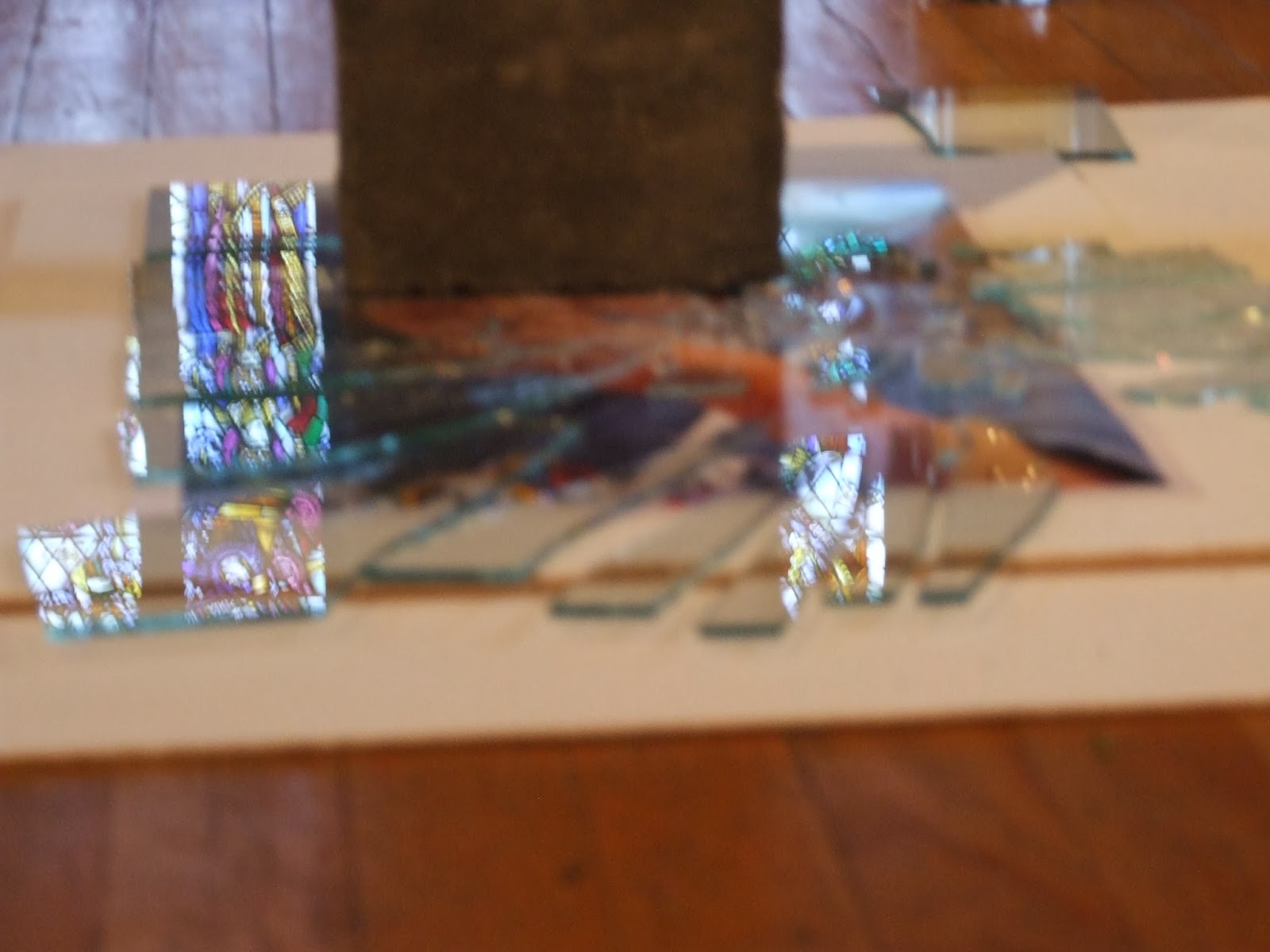 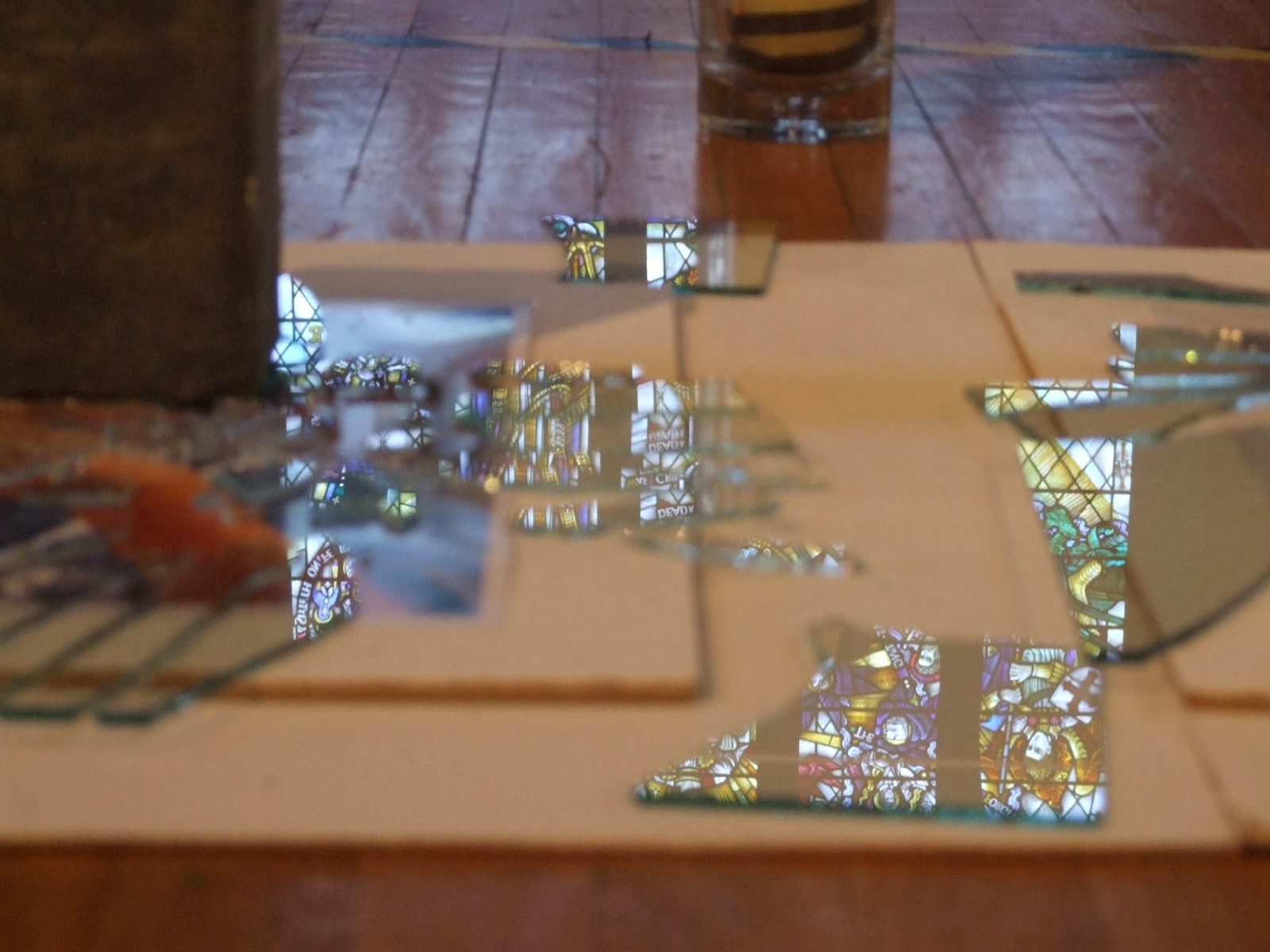 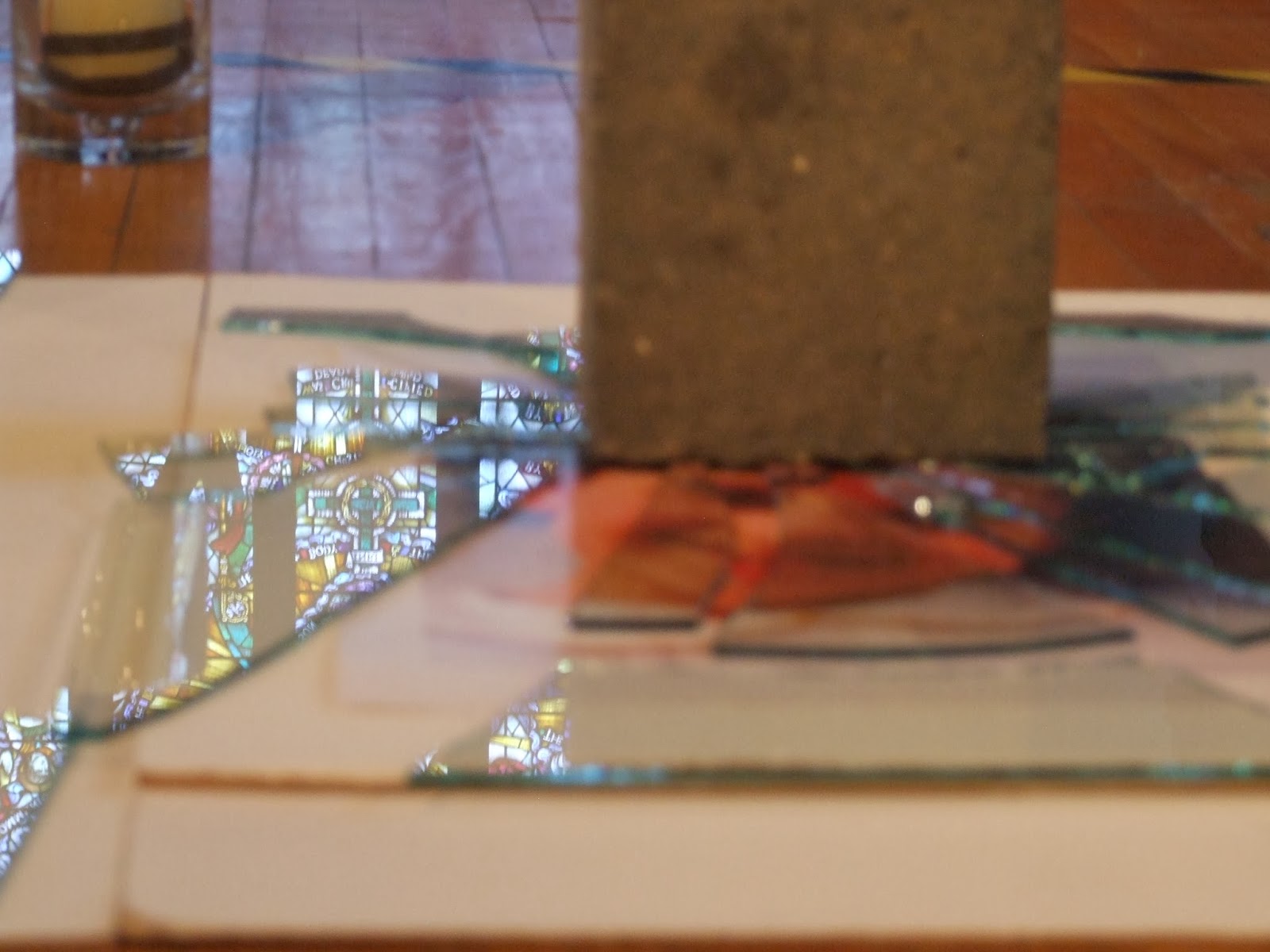 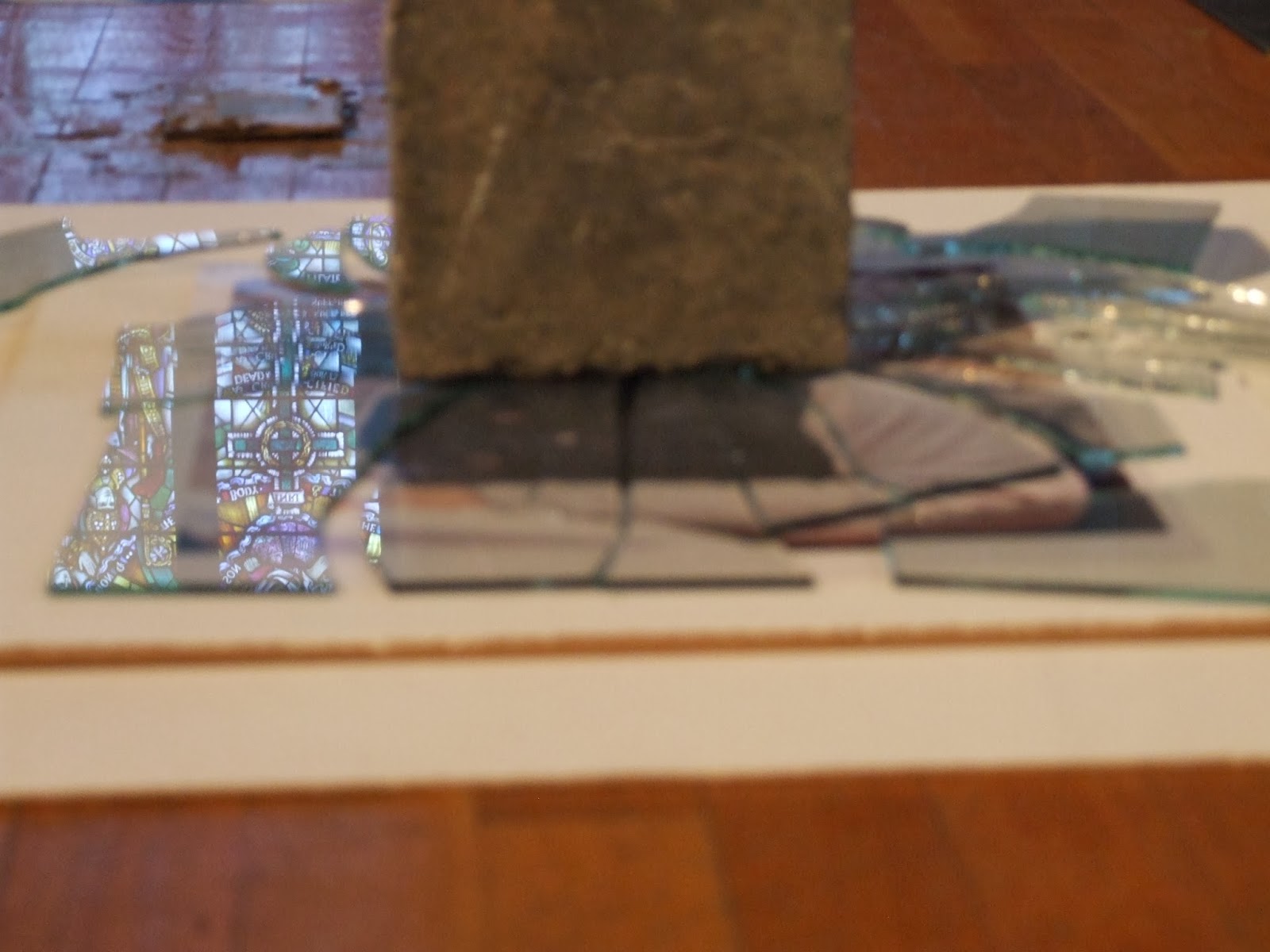 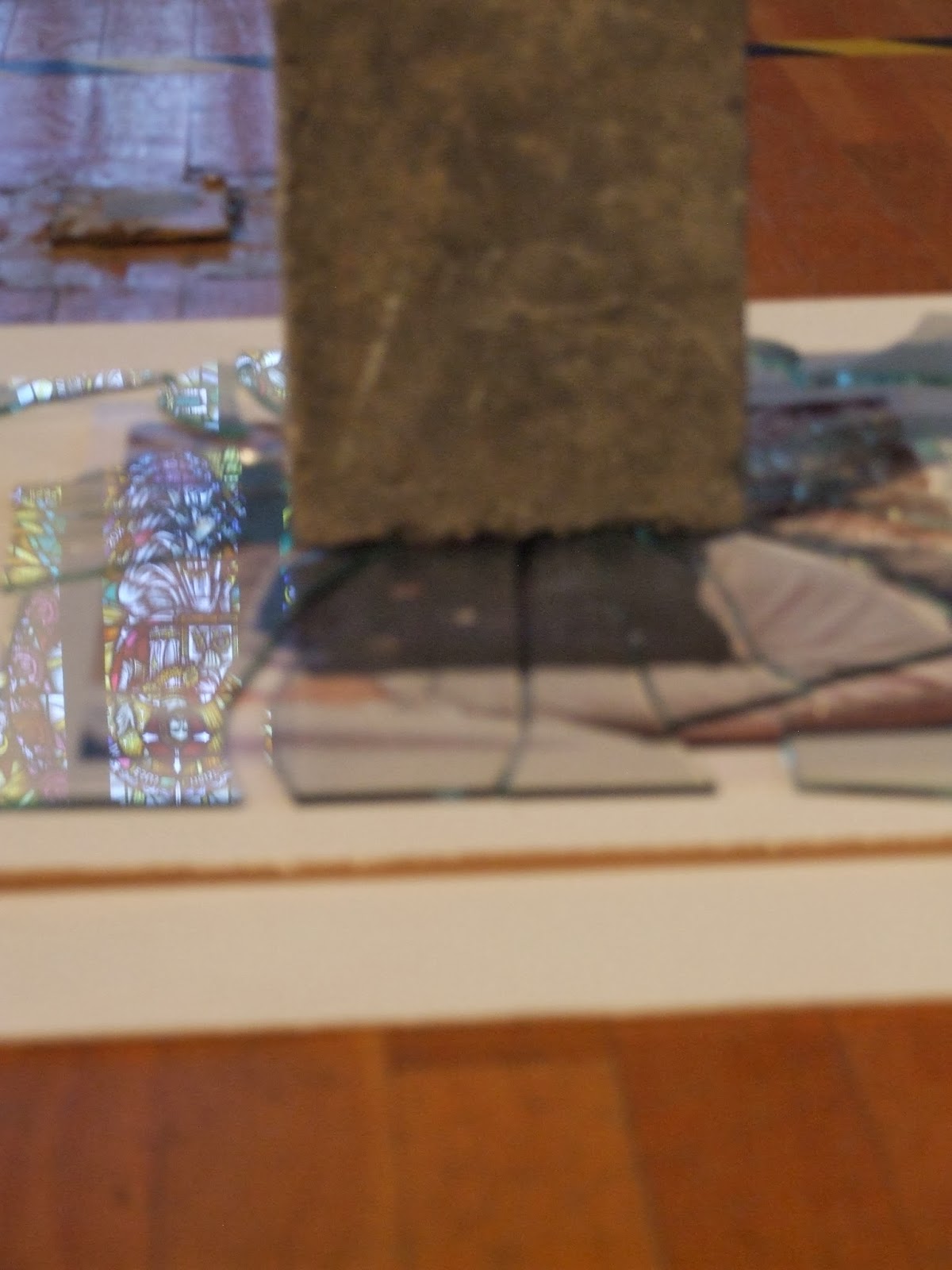 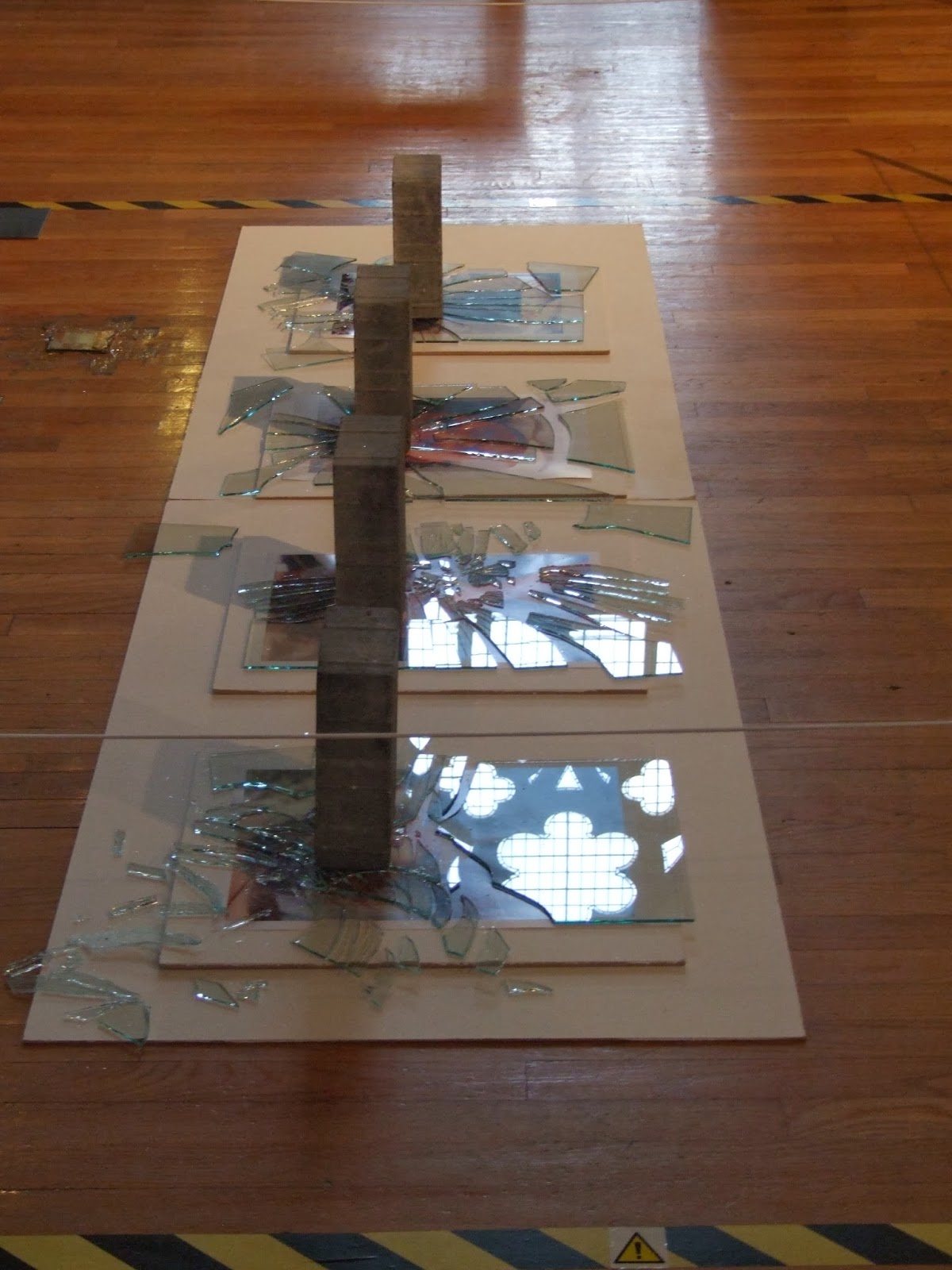 Yesterday, I smashed a concrete block into the face of a young girl.

Yesterday was Holocaust Memorial Day, an annual occasion of remembrance of those who died not only in the Shoah – the genocide of European Jews under the Nazis – but also in subsequent genocides in Cambodia, Rwanda, Bosnia, and the ongoing genocide in Darfur; as well as other atrocities. In opening-up Holocaust Memorial Day, we are not diminishing the Shoah, but recognising that we have yet to learn from that outpouring of inhumanity.

For over a week culminating with an inter-faith act of remembrance yesterday evening, Sunderland Minster has played host to four installations by local artist Barrie West. These have been imposed on us, disrupting our lives; inviting and challenging us to solidarity with others.

One of the pieces was ‘After the Storm’ – photographs of four children resting on the floor under picture glass, and four concrete blocks. When the piece was installed – right where we gather to celebrate the Eucharist, to give thanks to God for rescuing his people from captivity, to be healed of the self- and other-imposed wounds of division, to learn to bear witness to reconciliation – the first concrete block was dropped on the first image, smashing the glass. Over the course of the installation, two further images were smashed; and last night, at the heart of our act of remembrance, I dropped the final block on the remaining child.

This is not the first time Barrie has installed ‘After the Storm.’ People do not queue up to drop the concrete blocks. Often those who agree to do so find it hard to approach. Could you do this to a child? And always, they are deeply affected by the experience.

For me, approaching the moment was not especially difficult. Performing a symbolic act that opens those gathered around to God and neighbour and creates space for reconciliation to be embodied is a key part of my calling. I take my stand for others.

For me, approaching the moment was not especially difficult; but moving on – moving on rightly – was. My reaction was to want to numb the pain. To numb what I was experiencing, with alcohol or with comfort food. That, I think, is a perfectly natural and understandable response. But I knew that I had to resist it: that I had to feel what I was feeling.

When we move to numb ourselves from such pain, we remove ourselves, albeit by one tiny degree, from our fellow brothers and sisters; indeed, from our own humanity. Each time we numb ourselves from such pain, we become further and further removed, until we no longer register feeling, until we are no longer moved by human-inflicted storms that rip through the lives of others, until we no longer speak out, until indeed we are capable of ending life with violence because neither we nor they are human in our eyes.

Pain is not a gift we want. As a society, we spend more time, money and effort insulating ourselves from pain than we spend on anything else. We are evolving into inhuman beings.

We need to experience pain, in order to step back from the brink.

But the place of pain is also the place of hope. That is why both are present together in art, and in the Eucharist. Pain can be denied, or it can be transformed. That is why Holocaust Memorial Day, despite the ongoing history of genocide, is not an act of utter despair. Rather, it is defiance in the face of despair; insurrection in the face of inhumanity.

When the glass was smashed, it was filled with the reflection of our East Window (not at night, but during the day), which depicts the Apostles’ Creed. The Apostles’ Creed speaks of God entering-into our pain, our suffering at the hands of one another. (Fittingly, the window replaces a window destroyed by German bombing in WWII; ironically, the two phrases from the Creed omitted in the window are ‘He [Jesus] descended into hell’ and that at his coming again in glory he will act to establish justice through authority ‘to judge both the quick and the dead’). In the reflection, bright colours of hope over-laid the images and restored beauty where an attempt had been made to destroy something beautiful. But the bright colours were only visible from a particular angle, or perspective: not looking down on the destruction from above, aloof; but getting down on hands and knees, close among the shards.

Holocaust Memorial Day has passed for another year. But its invitation and challenge carries on. Lord, have mercy.

Posted by Andrew Dowsett at 3:12 pm No comments:

Not, I think, token gifts.

They come in search of a future king:

one of their own kind

in a royal court,

a familiar world of diplomacy and patronage of the arts and sciences.

They find him in unfamiliar surroundings. A small town on the edge of the capital. The kind of house the subjects of kings live in, not kings themselves. Not even courtiers, civil servants, academics.

But they unpack their treasure chests.

They might have kept them closed. Told anyone who enquired that they contained necessary provisions for their trip. Made polite noises – as politicians are supposed to do when they visit the voting public – and then a swift get-away, speeding up the highway by night.

They give what they have.

The tools of wealth – which will come in more than handy to a family soon to be political refugees.

The tools of prayer – of interceding before God on behalf of the poor, of standing with the oppressed.

The tools of mourning – to give a proper burial to infants massacred by a dictator, or those whose life would end too soon through the harsh realities of life among the common man.

Wise Men. Few and far between today, I tell you.

May the Christ-child, born again and again, set free within us compassion for our neighbour. Christ, have mercy.

Posted by Andrew Dowsett at 10:03 am No comments:

Email ThisBlogThis!Share to TwitterShare to FacebookShare to Pinterest
Labels: Epiphany

The sixth of January is the feast of Epiphany, the day we remember the Magi, or Wise Men, who interpreted the significance of a new star in the night sky as heralding the birth of a new king, and journeyed to find the infant-toddler Jesus. They brought with them treasure chests, containing gifts of gold, incense and myrrh.

You can read their story in Matthew 2:1-12. We don’t know how many Magi came, or where they came from, or who they were. Details of their journey are sparse – it involved a detour – as are details of the gifts they brought. Something about the account has captured people’s imagination; and its sparseness has left room for our imagination to flourish. Perhaps they came from the royal courts of the Empires into which the people of Israel had been carried off into Exile – those royal courts who had come across the hopes and dreams of Israel long ago, when men and women like Daniel and Esther were carried to them. Perhaps they came from further away: it is recorded that the most senior astronomer-astrologer of the Chinese court disappeared for several years at this time…

European tradition has assigned to the Magi the role of kings, and the names Caspar (who brings gold), Melchior (who brings incense) and Balthazar (who brings myrrh). And these names are represented in the Epiphany prayer, drawn in chalk above or beside the door of the house:

The numbers represent the year (so next year, the 14 will change to 15). The crosses represent Jesus. The letters represent Caspar, Melchior and Balthazar…and also the Latin phrase:

or, May Christ Bless this House [throughout 2014]


Epiphany is a Season, an invitation to seek Christ throughout the year ahead, starting with what we think we know and open to discovering something entirely unexpected. As we begin, you might like to write this symbol-prayer by your door, and make it your prayer that Christ may bless your house, and be found by all who enter…
Posted by Andrew Dowsett at 12:38 pm No comments: