God does God’s best work in the dark.

In darkness, God called out light.

But darkness, not light, is the birthplace of all creation. The story continues, “And it was evening, and it was morning; the first/second/third/etc. day.” In other words, the six ‘days’ of creative activity are, in fact, nights, ushered in by evening as the light fades and drawn to a close by morning as the light returns.

It is in that same darkness that God draws out femaleness and maleness from within humanness.

It is in the dark that God enters into a covenant with Abra(ha)m, having led him out to count the stars (long before light pollution), if that were possible, for so many would Abram’s descendants be.

Elsewhere, it is in the dark – physical and metaphorical and psychological – that God reveals to Job the extent to which the ongoing activity of creation still depends on the darkness within and from which it first responded to God.

It is in the dark that God reveals to Abraham’s run-away grandson Jacob the very gate between earth and heaven, busy with angels passing in both directions; and in the dark that God wrestles with Jacob all night, when he returned again to face his brother, his fears, his self.

It is in the dark that God speaks to Abraham’s great-grandson Joseph, in dreams beneath a starry sky, and the interpretation of dreams in a prison-house.

It is in the dark that God comes to lead his captive people out of slavery in Egypt; in the dark that they cross over the Sea of Reeds; in thick darkness on Mount Sinai that God meets with Moses and gives the Law, the shape of loving God and loving your neighbour in the same way as yourself.

It is in the dark that God teaches David to sing, Solomon to love, Elijah to hear the awesome sound of silence, Jonah to hope, Jeremiah to lament, Ezekiel and Daniel to foresee, Nehemiah to see.

It is in the dark that Jesus is born; and in darkness that shepherds and magi are led to worship him.

It is in the dark that Jesus goes to meet alone with his Father God.

It is in the dark that Jesus faces arrest and trial, strengthened by whatever it is that God is doing regardless of what people are doing in the darkness; and it is in darkness so thick that Jesus feels forsaken that God receives his spirit as he breathes his last.

It is in the dark that Jesus is brought back from death, in resurrection life.

In the dark, we learn to walk by faith and not by sight.

If you find yourself in the dark right now, take heart. You are in good company.

Posted by Andrew Dowsett at 7:13 am No comments:

A tale of two goats

Leviticus 16 tells the tale of two goats, who play a crucial role in a ritual of national healing and reconciliation.

The two goats are, together, taken for a sin offering. ‘Sin’ refers to all that divides us from one another; a ‘sin offering’ refers to a symbolic act of reconciliation.

The first goat is slaughtered, and its blood sprinkled in the tent that symbolised God living with his people. The reason you slaughter a goat is to extend hospitality, to serve up a meal for someone who has come to you, someone who by definition is ‘other’ in relation to you. This act is not done to appease God, but to honour God. It is done as a reminder of God’s mercy in choosing to remain with this people, even though they are totally undeserving, even though their habitual actions would give reasonable grounds to leave.

The second goat gets to live. This is the goat known as the scapegoat. The priest is instructed to lay both hands on the head of the goat and to confess over it the sins of the people, all of the ways in which they have offended against one another. Then the goat is led out into the wilderness and set free.

This is the exact opposite to how scapegoat is used today. Today we look for a ‘scapegoat,’ for someone other than ourselves, who is in no way to blame for our woes, and blame them. But that is not what a scapegoat is. The goat was not blamed for the sins of the people. The scapegoat was a symbolic mechanism by which the people owned their own sin, their own falling-short in their dealings with one another, and then let it go. Letting it go is not saying that it does not matter (if it did not matter, there would be no need for this ritual), but symbolically freeing one another from the relational debts we have incurred.

This morning I wake up in a nation that is bitterly divided. We desperately need the goat of hospitality extended to those who live in the same community but are distinctly ‘other’ to us, allowing hospitality to cross the divide. And we desperately need a scapegoat: a public acknowledgement of the ways in which we have hurt one another; and a public commitment to forgive those who have sinned against us, even as we ask them to forgive us for the ways we have sinned against them.

Posted by Andrew Dowsett at 12:29 am No comments: 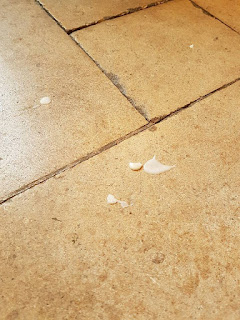 There is wax spilt on the floor of the chapel. I will need to get down on my knees and scrape it up. Or leave it for someone else to get down on their knees and deal with. I can only speculate over who spilt it, but I can do so one way, or another. Perhaps they were oblivious, careless in their action. It is of no matter to them that someone else will have to come along behind them and deal with the mess. Or were they aware, but in a hurry - unable to wait until the wax hardened and could be dealt with? Or were acutely embarrassed but, to their perceived shame, did not know where to lay hands on the necessary tools to do the needful task? I can allow myself to be irritated by this unknown person; or I can hold them before God today, as my brother or my sister, one as oblivious, as careless, as hurried, as spoilt by shame at their own lack as I am in turns?

Let the wax be my teacher. May it bring me to my knees before my God, there to look into the eyes of another. And may even our shortfallings leave a trace of our devotion, of the light we choose rather than cursing the darkness.

Posted by Andrew Dowsett at 6:06 am No comments: