I’m always interested in cultural-creative references to the Bible—my PhD focused on such uses in popular music from the 1960s-90s—and this is no exception. An artistic adaption of Nike trainers emblazoned with the reference Luke 10:18, ‘He [that is, Jesus] said to them [his disciples], “I watched Satan fall from heaven like a flash of lightning…”’

The trainers also contain a drop of human blood, and I want to juxtapose that against the Gospel reading for Morning Prayer today, Luke 22:24-53. This passage includes the account of Jesus praying immediately prior to his arrest, wrestling with what he knows is to come and pouring out his heart to the Father. It includes verses 43 & 44, which read, [[Then an angel from heaven appeared to him and gave him strength. In his anguish he prayed more earnestly, and his sweat became like great drops of blood falling down on the ground.]]

The double editorial brackets [[ ]] indicate that these are disputed verses. They are present in some of the ‘ancient authorities’ (earliest surviving copies of the text, and commentaries on the texts) but not in others. They have either been added, adorning the text; or censored, an attempted removal from circulation. Drops of human blood are controversial.

The linked article also notes the ‘Christian nationalism’ backlash, of which Nike is an innocent victim. The call to fight, hard, for the very soul of the youth of the nation is as predictable as it is disappointing. The way of Jesus is that blood voluntarily shed, without resistance, (somehow, ultimately) brings about reconciliation. Indeed, at his arrest, one of his disciples attacks with a sword, cutting off the ear of one of the crowd sent to take Jesus into custody; but Jesus categorically rejects this course of action, touches the severed ear and heals the wounded slave.

Nike have every right to seek to protect their reputation, against a powerful political lobby. But the idea that these shoes are a threat to souls, rather than the opening up of a conversation about the kingdom of God breaking in—to the kingdoms of the USA, or free-market economics, or culture wars, or insert your own—is reactionary, defensive, and misses out on grace. Rather than praying, “Father, if you are willing, remove these shoes from us…” we might better pray, “…yet, not my will but yours be done.”

Posted by Andrew Dowsett at 2:38 am No comments:

“Blessed are you, Lord God of our salvation,

to you be praise and glory for ever.

As a man of sorrows and acquainted with grief

your only Son was lifted up

that he might draw the whole world to himself.

May we walk this day in the way of the cross

declaring your love for all the world.

Blessed be God for ever.”

This is a prayer that is said at the start of the time of Morning Prayer in Holy Week, the days leading up to Easter. It is a blessing directed to God—that is, a recognition of the ‘fit-ness’ or fit-for-purpose of God’s nature—that invites us to notice that God is not indifferent to human sorrows and grief, but that it is in God’s very coming alongside us in the experience of suffering that we may be drawn into that place of reconciliation, of wholeness, that is found in Jesus Christ.

And walking in this way, we may discover that an acquaintance with sorrow is our blessing also, that only the person who identifies with sorrow and grief is truly a person at all, one who is formed by and for compassion.

We expend so much energy trying to shield ourselves, and those whom we love, from the sorrows and grief of life—I weep every time I hear a parent say, “I just want my children to be happy”—and our efforts contribute to the pushing-apart of the whole world, to its destruction. We have never needed Holy Week more than we do now. Lord, have mercy.

Posted by Andrew Dowsett at 3:19 am No comments:

The eighth and final series of Spiral has recently aired in the UK, and we are working our way through the back catalogue of this French (original, French, title Engrenages) police and legal procedural drama on BBC iplayer. It is described as ‘disturbing,’ on account of the behaviour of the police and lawyers often being indistinguishable from that of the criminals—all interlocked in a ‘spiral of violence’—but this is the very thing that makes it so interesting. Justice is not black and white, but includes many shades of grey.

It might surprise you to hear a vicar make such a claim, but it should not. Any honest reading of the Bible must recognise that even the most fundamental of laws require interpretation. Take, for example, the command not to bear false witness against your neighbour. To uphold this command, there are times when one is surely compelled to lie, to perjure oneself, to subvert the course of in/justice in order to protect another’s life.

In the centuries between the history recounted by the Hebrew Bible/Christian Old Testament and the New Testament, the Jewish community developed a complex legal system built on the Law given through Moses, including different and at times competing schools of interpretation. Christians are often quick to dismiss all this out of hand as legalism, but such a response verges on and may trespass into anti-Semitism. It is foolish, because English law (among others) is to a significant extent built on biblical law. It is foolish, also, because every community involves different schools of interpretation. Jesus himself does not dismiss the Law of Moses, or even the Oral Tradition per se, but stands in a long line of prophetic voices that call out those who confuse legal application with legal principle; those who overly worry about legal procedure; and those who hide behind the law to exploit others. And the apostle Paul does not so much concern himself with opposing Jewish self-understandings of the law, as addressing tensions between members of the Christian sect of Jewish and of Gentile background, as to the grounds on which Gentiles are included. Law, including moral law, is not static but dynamic.

To return to Spiral/Engrenages: if actions do not distinguish those operating ‘on the side of the law’ from those operating ‘outside the law,’ what does? In part, motive, and conscience, however murky; and in part the key theme of (the possibility of) being redeemed, of being freed from compulsive or addictive behaviour, to step into a freer life. The characters on the side of the law are painfully aware of their weakness, but—even if they cannot bear to admit to their (ironically, clearly visible) vulnerability before others—long for redemption, for themselves…and for the redemption of those who struggle alongside them, often wrestling, in a spiral not so much of violence as of hope. Even as character after character pre-emptively presses the self-destruct button, hope nonetheless endures, defiant.

At the end of the day, redemption cannot be found in ‘righteousness according to the law’ (nor in any other honour code) but is found in acceptance—acceptance within an adoptive family of others, and acceptance of ourselves. Redemption is the bloodied labour of self-sacrificial love.

Posted by Andrew Dowsett at 1:50 am No comments:

Email ThisBlogThis!Share to TwitterShare to FacebookShare to Pinterest
Labels: TV

The Gospel reading set for Morning Prayer today is John 7:53-8:11. A consortium of powerful men are seeking to bring down Jesus, to put him in his place, to end his career. They set a trap, and show that they are entirely prepared to destroy an ‘expendable’ woman for their purposes, to the point of literal death if needs be. They bring before Jesus a woman whom they claim has been caught in the very act of committing adultery, to see if Jesus will defy the Jewish law, which they argued called for a death penalty in such circumstances, or defy the Roman law, which did not permit the occupied Jewish people to exercise the death penalty: will Jesus be a traitor to his heritage, or an insurrectionist threat? Of course, despite the fact that it is not possible to commit adultery on your own—this woman is not accused of masturbating—no man is brought to this trial-by-mob.

Jesus takes his time, refusing to respond, allowing the full weight of the injustice to settle on the scene, before standing up to them, looking them in the eye, and saying, ‘Let anyone among you who is without sin be the first to throw a stone at her.’ This is not a general observation. There are clear sins being embraced here, including the intent to bring false testimony against Jesus, the act of bearing false witness against the woman, the intent to kill. One by one, the accusers are shamed into backing down.

What disturbs me is how often, these days, I hear people take Jesus’ words—let anyone among you who is without sin be the first to throw a stone at [insert name here]—to silence any voice that exposes the hypocrisy and power-games of those in positions of power, usually men. “We’re all sinners, who are you to judge another?” And this is bullshit, the absolute anti-Christ position. Jesus’ response in this episode is a devastating critique, one that ultimately contributes to his own extra-judicial trial and execution. We all live with the consequences of an unwelcome gap that exists between us and others, coming between even our closest relationships—we are all sinners, whose lives are as much shaped by sin as by love and goodness—but we do not all seek to manipulate others for their destruction and our gain in some zero-sum gain. Jesus throws his stones, not at the woman—whom he refuses to condemn, and releases into a new life—but with the precision of David flooring the giant Goliath.

There is no neutral position.

Posted by Andrew Dowsett at 2:24 am No comments:

Email ThisBlogThis!Share to TwitterShare to FacebookShare to Pinterest
Labels: Bible, faith and society

The sun and the mist 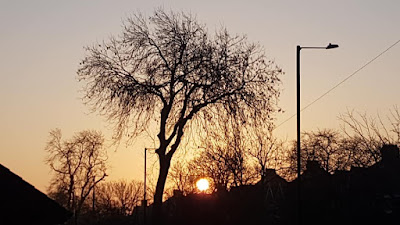 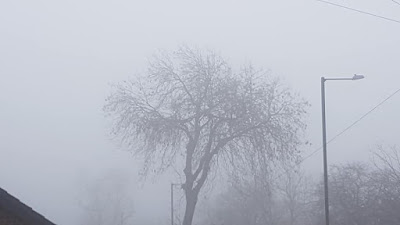 The sun rose this morning; but then the sea mist rolled in, turning the disc of the sun from gold to silver before obscuring it completely, scattering and diffusing its light.

I am reminded of Ecclesiastes, one of my favourite books of the Bible, which speaks of life in terms of what is enduring, and ephemeral. The sun rises and sets; winter gives way to spring, gives way to summer, gives way to autumn, gives way to winter again; rain feeds rivers, which run to the sea, from where clouds rise, to fall as rain; we are born, live, and die, giving birth to and burying others along the way, and so life goes on. We live in, and as part of, a fundamentally dependable, ordered creation; and everything is beautiful in its time, wearisome when we try to hold it back or hold on to it—for we can no more do so than grasp the mist in our closed fist. Life endures; life is fleeting. Receive the moment, for what it is, and the next, for what it will be.

Posted by Andrew Dowsett at 2:04 am No comments: