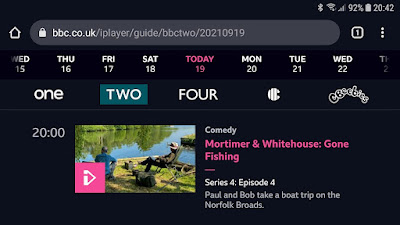 I’ve been thinking about friendship, what it does, why we need it, why we find it so hard to make and sustain such relationships—especially, perhaps, as we get older.

And, on Sunday evenings, we’ve been watching Mortimer & Whitehouse: Gone fishing (series 4, BBC2) in which comedians Bob Mortimer and Paul Whitehouse travel around the UK, going fishing, and having gentle conversations about life and growing older. Paul obviously knows more about fishing than Bob, but you don’t need to know—or even care much—about fishing to appreciate this study in sustaining friendship.

And the LORD God said, “It is not good for the human to be alone, I shall make him a sustainer beside him.”

sustainer beside him. The Hebrew ‘ezer kenegdo (King James Version “help meet”) is notoriously difficult to translate. The second term means “alongside him,” “opposite him,” “a counterpart to him.” “Help” is too weak because it suggests a merely auxiliary function, whereas ‘ezer elsewhere connotes active intervention on behalf of someone, especially in military contexts, as often in Psalms.

It is not good for the human to be alone, so God provides another. At this stage in the story, there is not yet gender differentiation: though we will come to a man and a woman—which will then be further related to marriage—even more fundamentally than that, here is the intended relationship between people. Any people.

I shall make him a sustainer beside him. The word beside can also express opposite, counterpart. It can refer to the two corresponding banks of a river. Hence the image of Mortimer and Whitehouse, standing alongside one another on one bank of a river flowing past them, casting a line towards the other side. And the wider the banks are apart, the greater the body of water they hold between them. As it matures, the capacity of such a relationship—whether a marriage or any friendship—to hold blessing for others grows. It carves out space to the benefit not only of the friends themselves but for life in its wider sense. Friendship shapes, and helps sustain, the world in which it is found.

So Bob and Paul mess about on the river bank, or on a boat on a lake, or on the sea shore, fishing. And in the evenings, they ask questions of one another, about life, their childhoods, their experience of growing older, where they still find wonder in the world, what gives them joy. They relate to one another in a way that is sustaining, they intervene for one another. In their conversation, casting out a line, a float bobbing on the apparently inconsequential surface, only to be pulled into the deep and moving, out of nowhere, if you have the patience; then reeled in, perhaps too rushed, an insight getting away before it can be examined closely, others held in the hand, enjoyed for its beauty, released back into the wild, carried off by the stream.

If you want to understand friendship, you could do a lot worse than watch Mortimer & Whitehouse.

Posted by Andrew Dowsett at 6:17 am