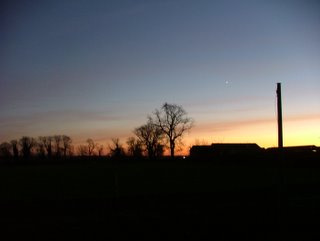 In all our moving around, we haven't been able to send out Christmas cards this year. So, I thought I'd put some images on the blog over the Christmas season instead; some - though not all - with meditations alongside.

This one was taken from out the back of my in-laws' barn conversion. You can see Venus in the sky, and a chink of light (it might even be car lights) at ground level. I like it because it translates the star that told ancient astrologers of a new king's birth, and the manger-scene, into our contemporary world - albeit a rural world quite different from the urban world I have mostly inhabited. (It also ties in with one of Steve Taylor's creative worship suggestions.)
Posted by Andrew Dowsett at 10:20 pm