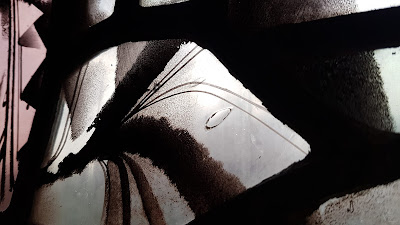 In which the exiles return to the beginning

And Terah took Abram his son and Lot son of Haran, his grandson, and Sarai his daughter-in-law, the wife of his son Abram, and he set out with them from Ur of the Chaldees toward the land of Canaan, and they came to Haran and settled there. And the days of Terah were two hundred and five years, and Terah died in Haran.

And the word of the LORD came to Jeremiah again while he was still shut up in the court of the guard, saying, “Thus said the LORD, Who fashions it to bring it about, the LORD is His name. Call out to Me that I may answer you and yell you great and lofty things you did not know. For thus said the LORD God of Israel concerning the houses of the city and the houses of the kings of Judah torn down before the siege-ramps and before the sword, those coming to do battle with the Chaldeans, but to fill them with human corpses whom I struck down in My wrath and in My anger as I hid My face from this city for all their evil. I am about to grant them a cure and a healing, and I will heal them and reveal to them a wealth of true peace. And I will restore the fortunes of Judah and the fortunes of Israel and rebuild them as before. And I will cleanse them of their crimes with which they offended against Me and with which they rebelled against Me. And it shall become for Me a joyous name, praise and glory, to all nations of the earth, who shall hear of all the good that I do for them. They shall fear and tremble over all the good and all the peace that I do for them.

Thus said the LORD: As I have surely set out My covenant with day and night, the laws of the heavens and the earth, so will I not reject the seed of Jacob and David My servant to take rulers from his seed, from the seed of Abraham, Isaac, and Jacob, for I will restore their fortunes and show them mercy.”

The origins stories of the returning exiles conclude with a link into the story of Abraham, drawn out from Chaldea, in what will be the original origin story of this people who will come to settle in Canaan, via a long detour into Egypt. Abraham’s story begins with  his father, and a setting out towards a vision Terah will not live to see fulfilled. Indeed, Abraham himself will not see it, for the vision God has placed in our hearts, if it truly is of God, is far bigger than our part within in.

As Advent draws to a close for another year, and prepares to give way to Christmas, we are reminded that the questions we bring to the issues we face are not met with false-comforting answers, but that our longing for God’s reign of justice and mercy to be more fully manifest is sustained once more. We are in this story for the long haul, the arc of history bending towards God’s will, done on earth as in heaven. And in this, we are not abandoned.