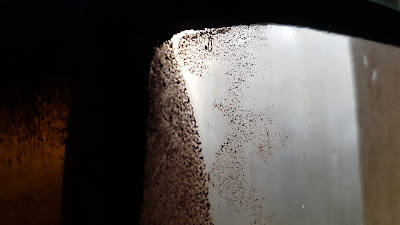 In which the exiles lay siege to themselves

And all the earth was one language, one set of words. And it happened as they journeyed from the east that they found a valley in the land of Shinar and settled there. And they said to each other, “Come, let us bake bricks and burn them hard.” And the brick served them as stone, and bitumen served them as mortar. And they said, “Come, let us build us a city and a tower with its top in the heavens, that we may make us a name, lest we be scattered over all the earth.” And the LORD came down to see the city and the tower that the human creatures had built. And the LORD said, “As one people with one language for all, if this is what they have begun to do, now nothing they plot to do will elude them. Come, let us go down and baffle their language there so that they will not understand each other’s language.” And the LORD scattered them from there over all the earth and they left off building the city. Therefore it is called Babel, for there the LORD made the language of all the earth babble. And from there the LORD scattered them over all the earth.

Babel represents the fall of the city, Jerusalem as much as Babylon, the lifting-up and bringing down of empires. As we draw very close to the close, the returning exiles are reminded that their God is at work in the changing fortunes of the nations, that, should they reject their vocation the Master who has humbled them before may do so again. In this world, there are no everlasting kingdoms. The stories that will sustain a people are not simply stories of specialness, of being chosen, but also lessons from past failures. Bricks and mortar matter, but they count for little if they become our grand enterprise, and even less if it is to our own glory. How then, might the things we build—our homes, our churches, our workplaces, our cities with their communal meeting spaces—bring people of different tongues—different languages and cultures, different worldviews and perspectives, different faiths and doubts concerning faith—together, to discover God at work in the contradiction and mess of our lives?