How the White Stripe got its cracks 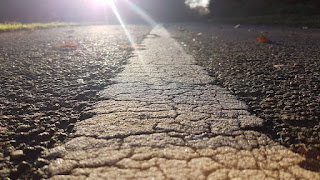 Once upon a time when the world was young, before ever anyone had even heard of populist politicians who told them to ignore experts and believe only fake news, the White Stripe’s hide was glossy and smooth. Day after day, it would sprawl under in the sun, stretching itself out from one horizon to the other, and all of the other creatures that walked along the path would admire the White Stripe’s perfect projection with envy.

But the White Stripe did not care to moisturise. And that is how it got its cracks.

Meanwhile, the path appears more divided than it actually is, to those who walk it to the left and the right; to those who are blinded because they are walking into the low winter sun, and those who see only their own shadow because they have their back to the light and their head bowed against the wind.

Posted by Andrew Dowsett at 8:27 am