This post is a technical one, relating to nurturing missional communities, both inside and outside of inherited church structures.

I’ve been thinking about two different kinds of communities of faith, and how they work together.  One is a community which is selected, where everyone is welcomed in, to whatever degree they are able to participate.  The technical term for such a community is ‘modal.’  The other is a community which is selecting, where few are invited to join, and a high level of commitment is expected.  The technical term for such a community is ‘sodal.’  A classic example of a modal community would be the parish church, which exists for anyone who lives within the parish, and ought to welcome anyone who wishes to join in.  (This is particularly true in rural areas; in urban areas the proximity of churches and the presence of greater transport options have allowed parish churches to be less modal, along lines of Christian consumerism.)  A classic example of a sodal community would be the convent or monastery, which are particular ‘set-aside’ communities, or theological colleges.  Both modal and sodal communities are necessary: but each one loses sight of its purpose where it loses connection to the other.  So nuns and monks serve those who will never become nuns or monks; while new nuns and monks – or indeed those called to any vocation (religious or otherwise) – begin to discover their calling within parish church communities.

Where missional communities are pioneered outside of inherited church structures, they tend to be predominantly sodal.  Members of the MC share a particular mission focus, to which they are highly committed.  If they were to attract too many people who did not share their vision and values, they would be in danger of dilution and dissipation.  As they engage with outsiders, it might reasonably be assumed that a majority of those who are drawn into the life of the community will come to share the common vision and values.  But this sodal community needs to have a modal fringe [see diagram], a place of transition where people can work out for themselves whether this is the community for them or not. 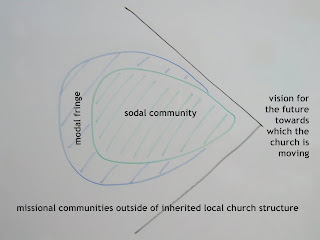 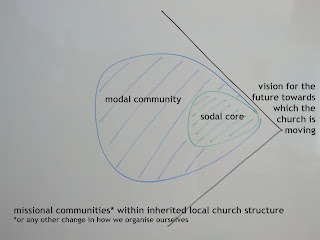 One of the classic traps church leaders fall into, in introducing any new way of being church, is to measure success in terms of take-up – and to measure ‘rebellion’ in terms of lack of take-up.  This bears such fruit as driven-ness on the part of the leader and those who support the vision; and resentment – on both sides, the leader resenting those who don’t follow, and those who don’t want to follow resenting being pushed, or ignored.  And there is much scope for such bad fruit, given that where a new way of being church is introduced (e.g. “We are a cell church”), take-up generally peaks at about 30%, with 50% being exceptional.

This is not failure.  Rather, we need to recognise that the inherited local church is – rightly – a modal community, which will have at its heart a sodal core.  That sodal core will keep renewing the wider modal community – while new sodalities will arise from within the modality.  We need the modality, not least:

as a place for later-adopters (those who don’t jump from one new idea to the next) to belong, rather than be driven away;

and to allow those who were not part of the previous sodality to respond to the invitation to step-into the new sodal core;

thus allowing leadership to be renewed, rather than assumed, within the community.

As leaders, we also need to die to success: if we believe that God is calling us to lead in a new direction – and if this is weighed by those who share the oversight of the community and they confirm our sense of calling – then it is our obedience rather than our success (how many go with us) that matters.