Tomato | Meditation On The Cross | 2 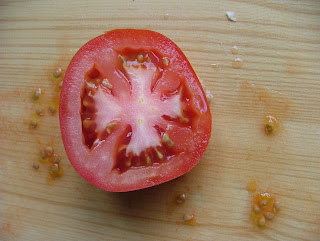 I sliced a tomato, and,
Revealed inside,
The cross.

But it is not manifest until our proclamation, our demonstration, in all its inadequacy, plays its part.

I am a kitchen-knife, in God’s hand.
But God grows the tomatoes, picks the tomatoes.
God chooses which knife he will take up,
And which lay aside, on any given occasion.
The knife’s role is both small and essential.

We do not usher-in the kingdom – Jesus did that, 2000 years ago.
But if that kingdom may be revealed through me,
If what is present becomes visible through me,
Then I am satisfied.


the cross , spirituality
Posted by Andrew Dowsett at 5:50 pm

Email ThisBlogThis!Share to TwitterShare to FacebookShare to Pinterest
Labels: spirituality