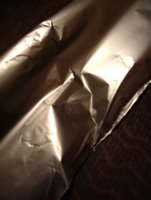 Next week (October 26th; we’ll be on holiday) Jo and I will have been married for ten years. Traditionally, that’s the Aluminium and Tin Anniversary. Now, what to get her…?


The modern re-calibration of anniversary gifts allocates diamonds to the tenth anniversary. (Jo doesn’t want a diamond.) With divorce rates spiraling, has ten years become a more significant milestone? I don’t think so: I remember being told by someone who takes a keen interest in British social history that, from the time records began until the end of the Second World War, the average length of a marriage here was eight years: women died in childbirth; men died in war; and men and women both died as a result of disease and of workplace accidents…Perhaps one of the (many, and complex) reasons divorce has spiraled is that a life-long commitment to someone who may reasonably expect to live into their eighties is bigger and scarier and harder than a life-long commitment that can reasonably be expected to last only eight years?

Perhaps the exchange of aluminium and tin for a diamond has more to do with our changing material expectations. Aluminium and tin aren’t very bling. But they have real value in the home. A cursory glance in our kitchen reveals a roll of baking foil; tins of fruit and plum tomatoes and beans and creamed rice pudding in the cupboard; cans of organic lemonade in the fridge…They don’t ‘Ta-Da!’ their presence. But – though life could, at the end of the day, be lived without them, if that should be forced on the family by external circumstances outside of our control – they play an invaluable and daily role in our life. A role that is easily taken for granted, unless seen through fresh eyes.


family , tenth wedding anniversary
Posted by Andrew Dowsett at 10:05 am